Reno, NV – August 25, 2007: The Vegas to Reno off-road race is always tough and this year was no exception with less than ½ of the entries able to make it to the finish line in Best in the Desert Racing Associations 570-mile race across Nevada. Aaron Dixon & Ed Ramirez started the race in the #7177 Dixon Bros. Racing Class 7100 Ford Ranger and ran without problems, swapping positions in the top three, until taking the lead just before the driver change in Goldfield (race mile 186). Ian Dixon and navigator Phil Ramirez had only been in the truck for five miles when the engine began cutting in and out before stopping dead on the course a few miles north of Goldfield. After a few moments of probing, Ian and Phil were able to get the truck running again but it continued to sputter whenever they hit a bump. We figured it was a loose wire or electrical component, said Ian.  This became clear when we were on the dry lake bed at full speed without an engine miss but, the rougher the course became, the more the engine stumble. They called the crew and arranged to pit in Tonopah (RM 226) for repairs. Aaron found a broken connection in the computer relay and once it was fixed the #7177 Dixon Bros Ford Ranger was back on the course and moving through race traffic again.

With the electrical connection fixed and everything working, I was finally able to drive, Ian said. The truck performed great with the newly tuned Radflo Shocks and all the prep work Aaron has done since the Terribles Town race. Its a big step up from our old Stock Mini (Class 7300) in terms of fun-factor. Night was falling as they passed through Pit #10 at Redlich (RM 336) on their way to the next pit stop, forty miles further on. Several miles beyond Redlich, the truck began to sputter, like it was starving for fuel. They managed to baby the truck another 10 or 12 miles before it stalled and left them sitting in the dark at race mile 350. Based on previous fuel pump problems, they decided to dismantle the fuel cell and found that both pickup hoses had again vibrated loose from the fuel pumps. After spending an hour and a half getting the hoses re-attached, Ian and Phil made it to Pit #11 (RM 376) about 11:00 PM where they turned the truck over to Aaron and Ed to take it the final 194 miles to the finish. It was shaping up to be a very long night.

The #7177 Dixon Bros. Racing Ford Ranger was running up to its potential once again as an exhausted Aaron Dixon took over behind the wheel at Pit # 11 with his sights set on the finish. Tim Lawrence, in the #7131 Ford Ranger had taken over the lead while we were fixing the fuel pump problem but he was having troubles of his own, as were all the Class 7100 trucks and everyones primary goal had become to simply make it to the finish. At race mile 424, Aaron came into a corner too fast and damaged his steering knuckle on a large rock. It took more than two hours to replace the knuckle before the #7177 Ford Ranger was back on the road. With 146 miles of rugged terrain remaining to the finish, Aaron was concerned that he was running out of time to recover from any more serious problems so he set a conservative pace the rest of the way.

The Dixon Bros. Ford Ranger took the checkered flag in third place at 7:13 AM on Saturday morning. The finish put Dixon Bros. Racing well into the lead for the Class 7100 Silver State Points Series championship with two races remaining on the 2007 race schedule. We want to thank all of our sponsors, particularly Goodyear Tire and Radflo Suspension for their support. We havent had a flat tire all year and the performance of the Radflo Shocks has been phenominal!

The next race for Dixon Bros. Racing is the Best in the Desert Las Vegas 300, October 5-7 in Jean, Nevada. 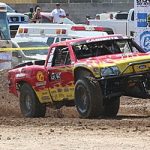