After finishing every race since the end of the 1999 season, the Dixon Bros. luck finally ran out at this years Parker 425 , when a rock kicked up by another truck, early in the race, got by all the safeguards and put a small hole in their radiator. Because the hole was a small one, the damage to the cooling system was not immediately apparent to driver, Aaron Dixon, who did not notice the gradually increasing temperature of the engine until it was too late. Although the temperature gauge seemed near the normal operating range, the truck started running erratically and began to seize up as they pulled over to survey the problem, ending their race after only 30 miles. Within a week, Ford had a new engine delivered to Dixon Bros. Racing, in Lompoc, California and not long thereafter the Ford Ranger was dialed in and ready to begin a new finishing streak beginning with the Terribles 250 at Primm, this weekend.

Best in the Desert Racing Association recently announced a record entry of 225 cars and trucks, reflecting a 25% increase in entries over last years Terribles Town 250, replaced this season by the Terribles 250 at Primm as the second event on the BitD Silver State Series racing schedule. Billed as the Richest Off-Road Race in Nevada, the Terribles 250 will be hosted by the Herbst family and Buffalo Bills Hotel & Casino. The course will start & finish in Primm, Nevada and will cover three 84 mile loops for a combined distance of 252 miles. In the interest of time, some slower classes will only race two laps. The entries will be split into two separate categories on Saturday with the production and limited classes (Group 1) starting at 5:30 AM and the unlimited class vehicles (Group 2) scheduled to begin their race at 1:00 PM. As part of the Group 1 race, the Dixon Bros. Racing Ford Ranger Pickup (#7101) will start fourth in Class 7100 about 6:00 AM on Saturday morning.

Aaron will drive all three laps with co-rider, Ed Ramirez in the navigators seat. Rounding out the team, Jim Dixon (father) and Phil Ramirez, will be on hand to help out in the pits with additional help from Ed and Phils parents, Manny and Andrea Ramirez. Dixon Bros Racing has been a family effort since the beginning and as a team have won three class points championships. This year each entry in a Best in the Desert event will be outfitted with the iritrack system so anyone can track the progress of the race on the internet in real time. You can follow the #7101 Dixon Bros. Racing Ford Ranger by tracking their progress on raceday at www.racetheworld.net.

Dixon Bros. Racing is ready for this event and the team is looking forward to a good finish in Primm. 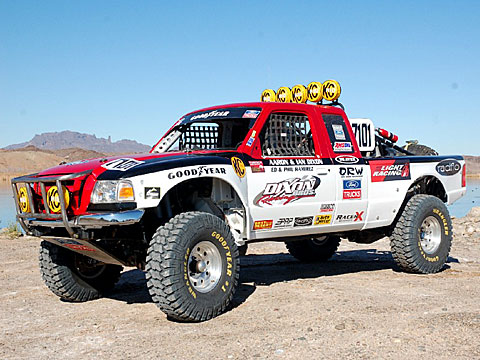 Best In The Desert Terribles 250 at Primm Update