From Prerunners to Side x Sides is the theme for this month’s issue of Prerunner Maniac. We hope this doesn’t piss off our diehard prerunner fans but who doesn’t like Side x Sides.

In this issue we feature 3 Side x Sides built by manufacturers of the products you would buy for yours. We have 2 from Beard Seats, a Teryx and RZR. They both feature a ton of things you would want for your Side x Sides

Then along with showing you the install of Dakota Digital’s new UTV-1500 RZR gauge, we are also featuring their Dakota Digital RZR S they brought to SEMA last year.

We have also included some news updates for the upcoming Best in the Desert Vegas to Reno – The Long Way race. BITD director Casey Folks has made this year’s race even harder, 3 days, 995 miles in total. We will be in Beatty next week to bring you coverage of this race in an upcoming issue.

We have also been hard at work getting things together for the second episode of Pump My Prerunner. We got some flack from some of the viewers saying we needed to test the Explorer more, well this episode we will not dissapoint.

That’s all for this month. 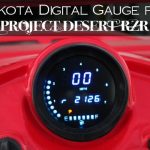 Down and Dirty September 2008