This month at Prerunner Maniac you’ll notice your issue getting to you a bit late. Well we wanted to bring you first coverage of the Best in the Desert Henderson Fabtech Desert Challenge. We posted our video on YouTube last week and have over 1000 views already. One of the most eciting parts of the 2nd race had to be this JeepSpeed Roll-over we caught on camera. The best part was the crowd rolled them over and they were off racing again.

This month and upcoming months you are going to see everything we saw at SEMA this year. We have our SEMA Show Coverage 2008 highlighting some of the new products we found.

Along with the debut of the Raptor at SEMA, had an ace up their sleeve with a factory based prerunner concept based on the 09 Tacoma Access Cab 4×4 truck.

Outside at SEMA we found this gem, a 7-Open Race Truck owned by OneShot Racing.

While walking around the main hall we came across the Polaris RZR Digital Gauge by Dakota Digital . This new gauge is so new there was not much information available to us at the show. We plan on doing a full report on this once they go into production in the next few months.

Be sure to look for more products featured from the 2008 SEMA show in upcoming issues.

We also have a few racing news updates from SCORE and from CORR. It seems the reigns are changing hands at CORR.

Be sure to tell your friends and your enemies to subscribe to Prerunner Maniac. Its free and you get to see some of the sickest prerunners in the West.

This is all for this month 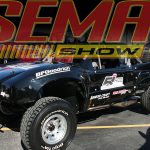 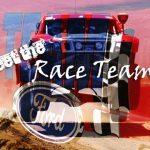 Down and Dirty January 2011