This month at Prerunner Maniac we have got some exciting prerunner features to show you.

Last week we went to the SEMA show in Las Vegas, and saw that Ford is releasing the Raptor factory prerunner to the public. Next month we will be giving you complete coverage of the SEMA show, but couldnt wait to get the Raptor in our pages.

To show the public the Raptor is a real desert bomber, Ford has made a class 8 version called the Raptor R, that will be taking on the Baja 1000.

Continuing our Side x Side features, we put the new RZR s fender flares on our plain ol RZR. These things went on easy and work really well.

Halloween Weekend saw the kick-off for Dumont Dunes and we were there. We saw some killer rails pull wheelies up Comp Hill and saw some very unusual vehicles too. Check out our coverage of Dumont Dunes Halloween Weekend 2008. Our friends over at Dirt Life Magazine introduced us to a friend of his with an F-150 Quad Cab Prerunner. We are going to try and get a photo shoot scheduled with him so you can see this thing in action.

This month we also feature another work of art from Stewarts Race Works. Check out Steve Olliges Luxury Prerunner.

We are excited about the upcoming Henderson Fabtech 400 race put on by Best in the Desert. It seems like forever since we had a race to cover with the second CORR race being cancelled here in the area. The are some new features of the race this year, that will make it better for spectators.

Be sure to tell your friends and your enemies to subscribe to Prerunner Maniac. Its free and you get to see some of the sickest prerunners in the West.

This is all for this month 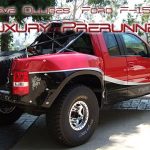 Down and Dirty February 2009