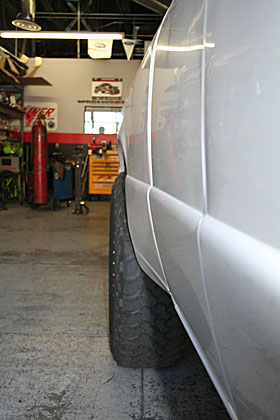 Bigger tires need more room. I found out the hard way when covering the BITD Terribles Town 250. The rear-end articulated and wreaked havoc on the wheel openings while getting to our spot for covering the race.

So why did we go with flared bedsides instead of fiberglass bedsides? Well I have a retractable tonneau cover on the bed that is great for keeping stuff safe. Since it retracts I can still use my truck as a truck. The rails this tonneau follows go over the lip of the bed, so it needs metal to rest on. Fiberglass bedsides would not be strong enough to hold this.

Even though we are showing you the steps on flaring the bedsides, we strongly recommend this be done by a Pro. If you go too far too fast you will get some creases in the bedsides you wont be able to fix. Lets take a look at how Robby Woolworth at Woolworth Motorsports flared the bedsides of our Desert 4×4 Project Prerunner. 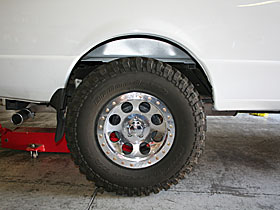 First you will see how much the new 33-inch tires stick out from the wheel openings.

Next you can see from a side view just how little room the 33s have.

So why didnt we stick some lift blocks on the rear and call it done? Lift blocks are great for those that need more room for large tires but they do nothing for increasing bump-travel. With larger wheel openings we have plenty of room to tuck those 33s on any terrain we want.

The first step in the process is to cut the wheel well support. This is a piece of factory installed sheet metal must be cut in order to allow the bedsides to be stretched. There are 2 pieces of flat stock that support the bottoms of the wheel openings. These must be removed too. 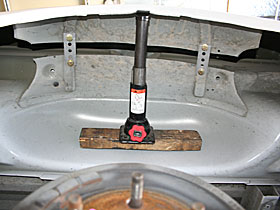 Using a 2×4 and his old bottle jack from his Ranger, Robby placed the 2×4 against the inner wheel well and placed the moving end of the jack against the lip of the wheel opening. This is where caution is needed. Robby has done a ton of these and with his experience he has learned just how far you can stretch Ranger and F-150 bedsides. He has made marks on the jack for each truck. This ensures both sides are even.

While the jack is still in place Robby used plumbers tape and bolts to keep the wheel well support separated. Next Robby took ½ by ½ square stock and flattened and bent them to match the angle on the old lower wheel well support bars. Obviously these had to be longer for the flared sides.

The next step was purely cosmetic. Robby took a rattle can of black paint and painted the inner wheel wells. This really made a difference in the look. He repeated the steps for the other side and that was it. Robby was also nice enough to fix the lip on the wheel wells with a mallet. It certainly fixed the work I did on them.

Here we have some shots of the after, first without the wheel on and then with the wheel on. You can see that there is no more tire sticking out. The next shot you can see from the sunlights reflection that there is a definite curve in the bedsides now. 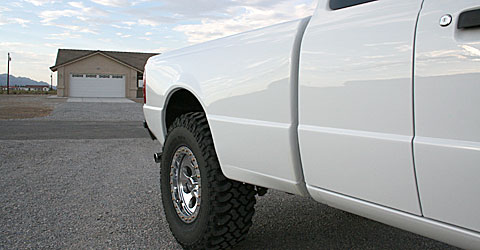 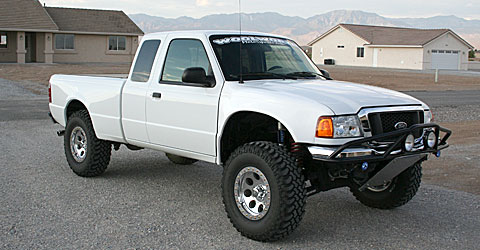 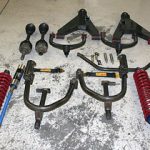 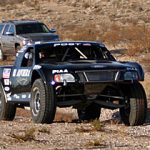 Terribles Town 250 was a Blast