Got back late last night after spending the day in Dumont. I have to admit it was my first time there, and all I have to say is WOW.

Talking with others it seems the turn out this year was about half of what it is normally. I think it might have been caused by the fires in SoCal as Dumont was a smoky mess.

Halfway there my Wife says, Did you bring the flag?” Dang I cant believe I forgot it”. So our first stop was to Vendor Row to buy a cheapy $10 flag. As soon as we get out of the truck someone drives up next to us with his RZR and loved the design of our new cage. We got a late start out because we were up until 2am finishing the top my Wife sewed for it. We chatted for a bit then headed on to find a flagwell we had no problems finding one.

The people we were meeting had been out there since Wednesday and they said, Go to the right youll see a large blow-up sheep on the top of our Toy Hauler”. We decided to unload the RZR and travel on that since it would be much easier that trailering it behind our truck. Well we went up a down each and every row for over an hour, then we finally see one of our friends trucks and no large sheep. As it turns out the owner of the sheep had to make a quick trip to Baker and forgot to inflate it in the morning. OK we found our friends and now had to find our truck and trailerthat took a while too. First thing we are buying is a GPS.

After getting settled in we all went to the North Pole”. My Wife and I are in our RZR and we are following a Long-Travel 06 Ford Ranger, and 2 giant 5 seat sand rails. After seeing all the groups of people at the North Pole is was time to head to Comp Hill. My friend Robby is telling us how he was all over it in his Ranger last night, and then said, Lets go up it in the RZR!!!” I said, Hell No, here are the keys, and you go up”. So he went out with another friend and after getting used to the throttle response and the braking, they went up the left side of Comp. After returning Robby said, With some paddles in the back you should easily make it straight up”.

Next we went for a ride in our friend Matts 5-Seater Dual Sport Rail. Words cannot even describe this experience. Imagine, a big buggy with like 20+ inches of travel and a 550+ HP LS motor. This thing literally flew up Comp. Later in the night we went for another ride down the bowl and over a set of rollers at about 65 mph. It was definitely an E” ticket ride. The day progressed into night and after making another trip to Vendor Row we headed back to camp and watched the kids come by in their costumes Trick-or-Treating. Then it was 8:30pm and we decided to load up. After about another hour of packing, loading and saying bye, we were on our way home.

Next time we go to Dumont we will have to get out there earlier. With the 1 hour spent looking for our friends the day seemed to end too quickly. Anyone looking to hit the dunes for the first time, be sure to be safe. Dumont is somewhat of a controlled chaos. There are some that dont like to follow the rules, but for the most part everyone is very friendly and will help out when they can. 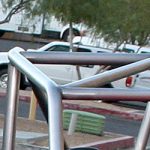