We already had great success using FOX Racing SHOX products with their remote-reservoir coil-overs in front and remote-reservoir shocks in the rear, so it just seemed logical to use their 2.0 bumpstops. We headed over to Woolworth Motorsports for the install as they have done all the fabrication work for us in the past.

As I mentioned with the cans already there, it is simply a matter of slipping them in the cans and tightening the bolts that hold them in place.

The first step after getting the truck up on jack stands was to remove the lower bolt of the limiting straps. This allows the front a-arm to droop out further making it easier to slide the bumpstops in from the bottom.

Next we released the nitrogen from the bumpstops to make it easier to compress them. Since there is not enough room to slide them in fully extended this is a necessary step. 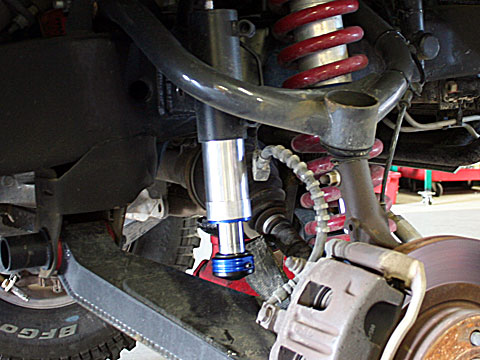 The bumpstops were slid into place then the retaining bolt tightened and that was it. Oh we had to refill them with nitrogen afterwards, but that too is a simple step like filling your tires with air. 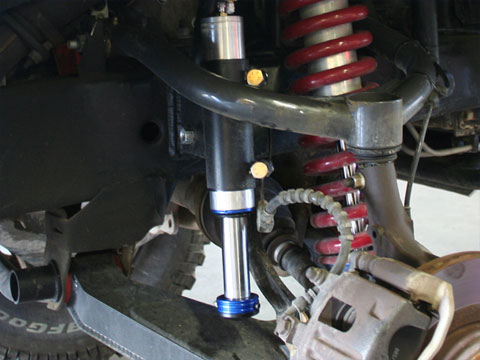 What did we think of the FOX 2.0 Bumpstops?

Our main reason for installing these hydraulic bumpstops was we noticed some paint missing from the inner fender wells after just a small jump in our Project Desert Ranger. Being 4WD this prerunner is a bit heavier in the front than its 2WD brethren. It seemed like a no brainer.

We headed out for a little testing in some rutted out dirt roads near us and found the air bumps did a great job preventing the tires from contacting the inner fender wells.

Testing them over a small jump I could feel a much smoother landing than without them.

Our test area is nothing but clay soil and after it rains many people like to go thrashing through the mud. When the mud dries all that is left are huge rock hard ruts from the Mudders spinning their tires. I am not going to say that after installing the FOX bumpstops that it felt like glass, but it did soak up a ton of the jolt caused by the deep ruts.

Did the FOX Racing SHOX bumpstops do their job?…I have to answer yes on that one.

How to Shorten a Hydraulic Bumpstop

Lift or Long-Travel Which is Best