LAS VEGAS – In a season that has seen a record number of entries in two of three races, the second half of the six-race 2007 SCORE Desert Series begins next weekend in the glistening spotlight of Las Vegas with the SCORE Las Vegas Terrible’s Cup III. The two-day special stadium-style event will be held on the fan-friendly 1.5 purpose-built desert race course under the lights on the Dirt Track at Las Vegas Motor Speedway.

In a season of tight point competition, it will be a point’s race for the first time in its brief three-year history and there are a race-record 90 official entries (to date) from seven states and Mexico in the limited-field event.

Six car and truck classes will compete in the unique short-course, stadium-style event that will be part of this year’s championship point races in the World’s Foremost Desert Racing Series for the first time and the event will again be held under the lights at 7 p.m. next Friday and Saturday nights on the world-class Dirt Track at LVMS. With entries excepted until the morning for the race, over 90 of the best racers from the SCORE Desert Series are expected to be in the starting grid for this exciting racing extravaganza.

Nearly 90-percent of the specially-made chunk of Baja’ 1.5 mile course will be viewable from the grandstands in the 8,026-seat facility. Competing in individual races will be the marquee SCORE Trophy-Trucks, the unlimited SCORE Class 1 open-wheel desert race cars along with open-wheelers in Class 1-2/1600, Class 10 and SCORE Lite and the competitive mini-trucks of Class 7.

Among the SCORE desert racing superstars to be showcased under the glistening lights of Las Vegas will be the Terrible Herbst Motorsports Team featuring the three Herbst brothers of Las Vegas along with teammate Larry Roeseler of Hesperia, Calif.

Ed and Tim Herbst are the winningest SCORE Trophy-Truck team in history with 11 career race wins and four season point titles in the No. 19 Terrible Herbst Motorsport Ford F-150.

With Larry Roeseler as the driver of record and Troy Herbst as the second driver this season, the pair will be racing in the legendary No. 100 Ford-powered Smithbuilt open-wheel desert race car in the unlimited Class 1. Since it’s debut in 1997, Troy Herbst has led the Landshark’ to an unprecedented 22 race wins, seven Class 1 season point crowns and four SCORE Overall season point championships.

‘We are extremely enthusiastic about the response to this year’s SCORE Las Vegas Terrible’s Cup III,’ said Ed Herbst, President of Herbst Gaming which is co-sponsor of the event. ‘The first two years were phenomenal and with it being a point’s race for the first time and the enhancements being brought to the event, we are confident that this year’s event will be off the chart. Terrible Herbst loves Las Vegas, we love Sal Fish and SCORE desert racing and we are very proud to help showcase our sport and this event to our hometown.’

Bill McBeath, a native Las Vegan and UNLV graduate who is President/COO of the famed Bellagio Resort in Las Vegas, will lead a race-record 21 of the high-tech, 800-horsepower, unlimited production trucks in the marquee SCORE Trophy-Truck division to the world-renown LVMS facility. He drives the No. 91 Ford F-150, which is prepped by Collins Motorsports of Las Vegas.

Besides the Herbst brothers, leading the contingent of SCORE Trophy-Truck superstars to Las Vegas Motor Speedway will be this year’s top 5 season point leaders, three of which have drivers from Las Vegas. The SCORE Trophy-Truck field includes 10 racers who have combined to win 45 of the 80 races in the 13-plus year history of the famed SCORE racing division.

Flyin’ Hawaiian Alan Pflueger is fourth in SCORE Trophy-Truck points with 232 in the No. 28 Pflueger Racing Chevy Silverado and Garron Cadiente, the 2006 SCORE Rookie of the Year from Mesa, Ariz., is fifth with 225 points in the No. 38 G&R Racing Ford F-150.

In addition to the previous group, also entered in the featured SCORE Trophy-Truck division is Las Vegan Bobby Baldwin, who drives the No. 96 Baldwin Motorsports Chevy Silverado.

Baldwin, the President of the MGM Mirage Resorts in Las Vegas, is the father of B.J. Baldwin and the immediate supervisor of McBeath. The colorful Bobby Baldwin was also the world champion of the 1978 World Series of Poker.

Ryan Arciero, Foothill Ranch, Calif., another of the talented second-generation SCORE desert racers, will be pulling double-duty next weekend. Besides racing the No. 82 Arciero/Miller Chevy C1500 in SCORE Trophy-Truck, he will also be computing next week to race in a VW Touareg Race 2 in the Pike’s Peak Hill Climb in Colorado.

Racing will begin at 7 p.m. each night at LVMS and both nights will innclude with crowd-pleasing Terrible’s Fireworks Shows. A popular pre-race fan favorite is the meet the racers party down on the track where racers and their vehicles are available for an hour of photos and autographs.

Each class will race twice each night as full fields, while the SCORE Trophy-Trucks will be split into two heats with a full-field semi-main event on Friday and a main event on Saturday.

As a prelude to the two days of racing, the SCORE Las Vegas Pit Stop at Fremont Street Experience will be held next Thursday. At the SCORE Pit Stop, starting at 6 p.m., there will be a vehicle display and the $10,000 Terrible’s Pit Crew Challenge for SCORE Trophy-Trucks, meet the SCORE racers party for all competing SCORE racers under the multi-million dollar canopy on Fremont Street.

The event will also feature TERRIBLEvision for the first time, with a mammoth LCD screen bringing the live race action from throughout the course and scenes and interviews from the pits even more up-close and personal. Terrible’s Fireworks shows will explode each night during to the second intermission.

The tightly-timed, three-hour, 15-minute nightly event has added an exhibition event each night of the vastly popular new Trophy-Karts with drivers from 8 to 12 years old making their Las Vegas debut.

While early-arriving fans will again be able to participate in the pre-race driver autograph party and vehicle display of all vehicles entered in the race down on the race track each night from 5:15 p.m. to 6:15 p.m., the first 2,500 fans each night will receive a miniature replica of the No. 19 Terrible Herbst Motorsport SCORE Trophy-Truck, the winningest truck in the history of the class.

The talented field includes 17 entries from Southern Nevada to date.

Tim Gendreau, owner of Racer Off-Road in Phoenix and a veteran sports car road racer, will make his SCORE debut, driving the No. 47 Racer Off-Road Chevy Silverado, he will start on the pole in the second heat.

Action sports television announcer Cameron Steele, another celebrity SCORE regular and a certifiable glutton for punishment, has entered three classes. The popular racer will drive his No. 16 Dessert Assassin Cadillac Escalade in SCORE Trophy-Truck and the No. 1201 Desert Assassin-VW in SCORE Lite and his same Desert Assassin-VW in the unlimited Class 1 as No. 120. The popular Steele, who leads the point standings in SCORE Lite, will spend his free’ time at the event as one of the event Public Address announcers.

For the General Admission sections, individual tickets are $15/$20 and $30 for the discounted two-day SCORE Combo. Permanent seating at the facility is 8,026

SCORE Pit Passes are available for $10 per day or $15 for the discounted two-day SCORE Pit Combo.

With co-title sponsorship from Las Vegas Events and Terrible’s Convenience Stores, the SCORE Las Vegas Terrible’s Cup III will again feature two nights of racing on the LVMS Dirt Track. Racing will be on a purpose-built race track with limited pavement and man-made dirt simulations of the rugged desert terrain.

SCORE International, based in Los Angeles and founded in 1973, is the world’s leading desert racing organization. SCORE produces the annual six-race SCORE Desert Series, which includes three races in Baja California, Mexico and three in Southern Nevada. SCORE has 28 Pro and 6 Sportsman classes in the desert.

The SCORE Laughlin Desert Challenge, held each January, and September’s SCORE Las Vegas Primm 300 are also both sponsored by Las Vegas Events and the Las Vegas Convention and Visitors Authority.

The 2007 SCORE Desert Series also includes the chase for the $75,000 Kartek Off-Road contingency bonus to be awarded to several 2007 SCORE Class point champions along with the run for the $12,000 Toyota True Grit and Toyota Milestone Awards.

Founded in 1981, Las Vegas Events, Inc. is a private, not-for-profit organization that serves as the exclusive major special events agency for the city. LVE is an active marketing partner for this new event. For more information or to order tickets on-line, visit the official SCORE Las Vegas Terrible’s Cup IIII website at www.scorelasvegas.com. For more information on LVE, contact 702.260.8605 or visit the LVE website at www.lasvegasevents.com.

For more information regarding this SCORE event, contact SCORE International at its Los Angeles Headquarters at 818.225.8402 or visit the official website of the 2007 SCORE Desert Series at www.score-international.com. 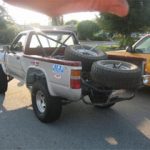 I Want To Buy A Prerunner

See Us At SoCal Dirt and Sand Expo

Terribles Town 250 was a Blast