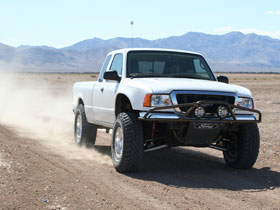 Was it worth the work?Hell Yes!!! After spending days at Woolworth Motorsports shooting pictures of the front end build I finally got the chance to hit the desert and see what this thing can do.

The test started on a deeply rutted road to get to our test spot. In stock form I could only manage 15mph and still I was bouncing around like I was on a pogo stick. The first thing I noticed was how well the FOX coilovers made me feel like I was floating. WOW what a difference. My neighbor came along to help with the shoot and the first words out of his mouth was, How fast are you going? With an ear-to-ear grin I replied, 40mph, almost three times faster. Another friend of ours followed us in his Chevy HD 4X4. Now this is an awesome truck, and will pull your house down the street, but he too found the limitations of his suspension as we left him in the dust. 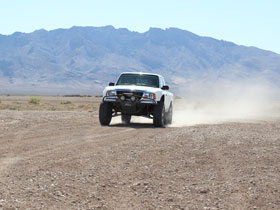 There is a line of mesquite trees that blocks the path to get to the test spot with small openings to pass. Getting here you drive over 2ft. deep ruts caused by water running across this area. The front end articulated nicely as we traversed this small technical area to pass through to the open range. This is where we noticed the limitations of the stock rear suspension. The front wanted more while the rear screamed for help. We would travel over a whoop and feel nothing until the rear shot us skyward. From that point we decided it was not smart to try and fly over the deep whoops until we got the rear done. 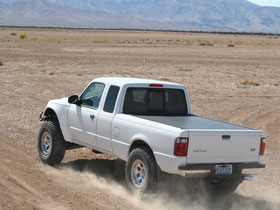 We hit the open range where our true test would begin. I started from a stop and romped on the gas. I wanted to test the traction of the new 33 BFG Mud Terrain tires, and they never let me down. The rear-end squatted a little and sent me flying. Our project Ranger came with a factory limited-slip rear-end so traction was enhanced by both wheels spinning. Still on the gas the rear of the truck started to drift to the right and with a slight nudge of the wheel we were on our way to one of many speed tests.

Again with the limitations of the stock rear aside the Ranger did very well over the small whoops in the area. I was able to hit 50mph over certain areas, and the clouds of dust that followed me are the proof. After doing a few power slides we were off to see how a long-travel suspension affects climbing.

We ventured off to find something to climb and encountered a wash of silt, or poof dirt as we call it here in the valley. Still in 2WD the BFGs plowed right through it. We came upon the base of a small rock strewn hill, and my neighbor stood at the top waiting as the Ranger crawled like a mountain goat up. I put it in 4-Hi and it creped up without hesitation. Part of the reason this front-end kit works so well is you remove the front sway bar when you install the kit. This worried me at first, wondering how it was going to handle on the highway. My worries were put to rest after the Ranger hit 75mph. I actually got better handling on road that I had with the factory suspension. By removing the anti-sway bar the A-Arms have a lot more room to travel.

Back to the hill, I crested the top and noticed with the slight nose-up fashion of Prerunners that going over the crest of a hill or mountain can be scary since it is harder to see down the hill. With the help of my neighbor acting as my spotter, I broke over the edge and held it for a few shots of the suspension. We got pictures going up and coming down, and the Ranger felt like it was in its element. This was the whole reason I choose this kit. I get to experience the thrill of a Baja Desert Racer, and I can hit the mountain trails that surround us for a little technical 4X4ing.

The day was long and we decided to head back home. All in all the kit performed extremely well. We did not get to truly test it because we still need the rear done, but I am happy with the results. Robby Woolworth assured me the truck would scare me before I found the limitations of the suspension.

Now it is time to save the money for the rear to get done. This will include Deaver Springs famous long-travel leaf springs, FOX remote-reservoir shocks and fiberglass bedsides. Originally I thought of just having Woolworth flare the stock bedsides but you will see in another article why I changed my mind.

Feel free to send us your comments and questions. Until next time, May Travel Be With You. 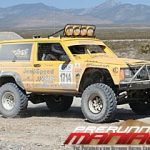 JeepSpeed  Racing on the Cheap