The 2010 season will see the addition of three rounds of racing over the 2009 schedule while the Challenge Cup races will now be contested on the final Sunday of the season. The series returns to Primm, Nevada, SpeedWorld in Surprise, Arizona and Lake Elsinore Motorsports Park in California while Phoenix Firebird Raceway and Miller Motorsports Park, in Tooele, Utah, will be hosting their first ever short course off road races. "Our successful inaugural season has allowed us the opportunity to expand the series into these fantastic new venues and build strong partnerships as we bring short course off road racing into new markets," said Lucas Oil Products Executive Vice President, Bob Patison.

Miller Motorsports Park adds the Lucas Oil Off Road Racing Series to a schedule that sees visits by the FIM Superbike World Championship, NASCAR Camping World Series, Grand-Am Rolex Sports Car Series, American Le Mans Series, and numerous other motorsports events. Just outside of Salt Lake City, the state of the art facility is considered the finest facility of its type in North America. "Miller Motorsports Park is excited to host the Lucas Oil Off-Road Racing Series in 2010," said John Larson, Miller Motorsports Park Senior Vice President/General Manager. "This series adds another interesting facet to the variety of events that we offer, one that we think will be very popular in this market. Lucas Oil Products is an innovative, forward-looking company whose business philosophy aligns nicely with our own, and we look forward to a long and mutually beneficial relationship with them." The off road track, with signature high flying jumps and whoop sections, will be built within the tracks existing 4.5 mile circuit.

Contributing to the strong short course off road fan base developing in the Phoenix region is the addition of Firebird Raceway to the 2010 LOORRS schedule. "We are thrilled to be partners in such a great event with the Lucas Oil Off Road Racing Series. This is going to be wonderful for the Phoenix area," said Charlie Allen, President and owner of Firebird Raceway. Firebird, host to NHRA Nationals, the IHBA Finals, Monster Trucks, and other events, will be the location for the season finale in December. Mike Kessler, Sales Director of Firebird Raceway, had this to say, "Myself along with the entire staff at Firebird Raceway are so pumped and excited to partner with LOORRS and host a killer event for the fans!" 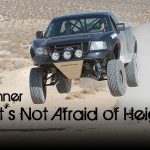 Lucas Oil Off Road Off Road Racing On NBC