Best in the Desert’s Casey Folks announced today that more than 270 entries have already signed up to compete in the epic TSCO Vegas to Reno race on August 18-20. With more entries continuing to come in, close to 300 are expected by race day. The steadily growing field features big numbers in several classes. Three of the fastest classes have a total of 87 entries so far. There are 27 800+ horsepower Trick Trucks; 39 Class 1500 unlimited buggies, and 21 Class 7200 Mini Trick Trucks. On the powersports front, there are 15 UTVs, 22 quads, and 75 motorcycles registered.

At 549 miles in length, the Best In The Desert TSCO “Vegas to Reno” race is certifiably “The Longest Off-Road Race in the United States. It also marks the midway point for the five-race 2011 Best In The Desert season featuring the car and truck classes and is one of the most popular events on the schedule. The challenge and adventure of competing in such a long distance “point to point” race always brings out the top off-road race teams. Not only is this going to be a big event but it’s also the 15th running of TSCO “Vegas to Reno.”

Open to all Best In The Desert classes – cars, trucks, UTVs, quads and motorcycles, following is a list of the 2010 TSCO “Vegas to Reno” defending class winners:

Friday, August 19th – Race for all classes starts near Beatty, finishes at the Dayton Event Center.

The weekend gets started Wednesday, August 17th, for Trick Truck and Class 1500 open class buggy racers as they qualify in the Time Trails to determine their starting positions and compete for the $1000 “Team Ford Pole Award”. Not relying simply on “the luck of the draw” for the starting order, Best In The Desert allows the two fastest classes to compete head-to-head for their chance to be first off the line and the best opportunity for the overall finishing spot. 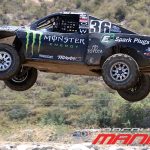