If you read our blog or have seen in last months issue we showed you how after only owning our RZR for 6 days we flipped it on its lid.

The stock cage did its job protecting our neighbor and his son, but was tweaked as a result of the roll-over. We decided it was time for something better.

Along with this custom cage we also replaced the front and bed plastic as they got messed up as well.

After talking with Robby of Woolworth Motorsports about some ideas for the cage we decided on a cage with new door bars and a spare tire carrier. We also discussed creating compartments to hold a gas can and cooler, but after we completed the cage we thought it would look too busy, and it would limit what I could use the bed for.

We started by removing the stock cage. To make this easier we cut access holes in the old plastic to get to the mounts. 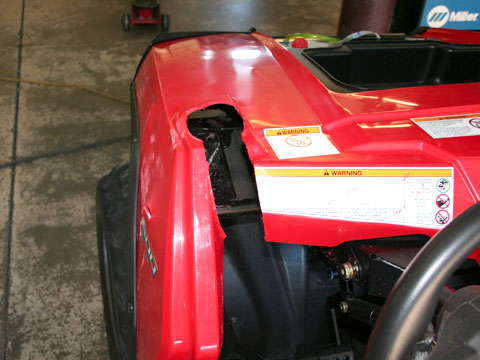 Most cages I have seen for the RZR use the factory front mounts so they can be unbolted with the front plastic in place. We decided on safety over looks and choose to go another route. 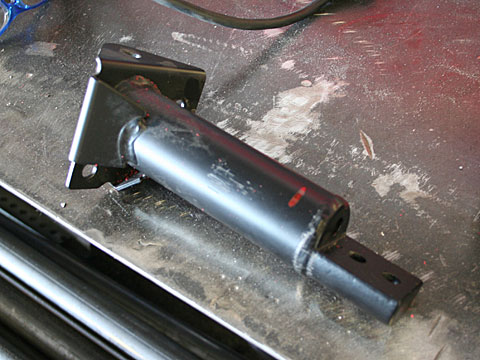 We did use the original mount, but it has been sleeved for added strength. 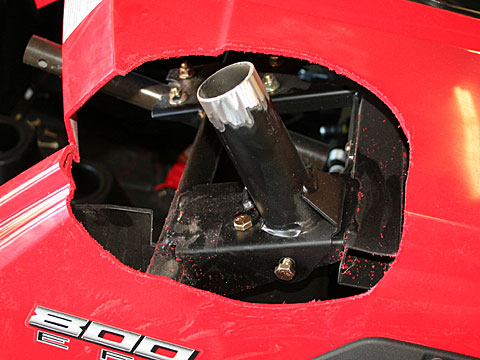 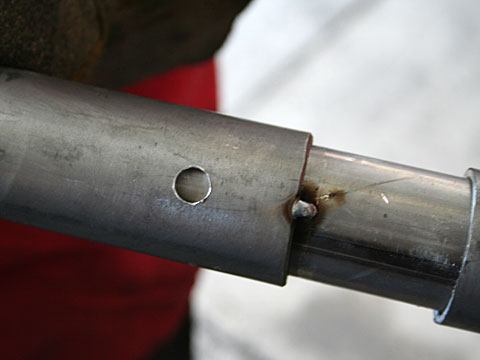 After the top side hoops were tacked into place we added the top cross bars and rear cross bars. This will significantly increase the cages rigidity. 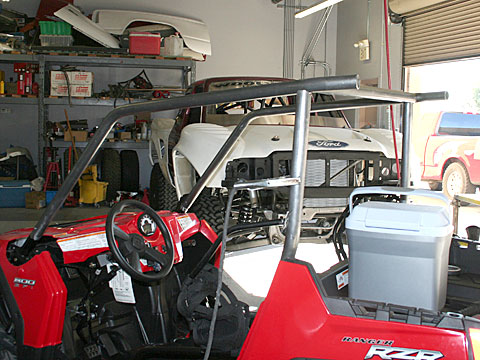 Next the rear down bars were bent and mocked into place. This connection was also sleeved for added strength. 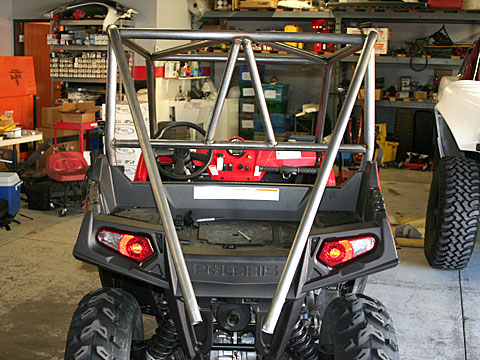 The rear bumper was bent and mocked into place before the first tack weld was done. 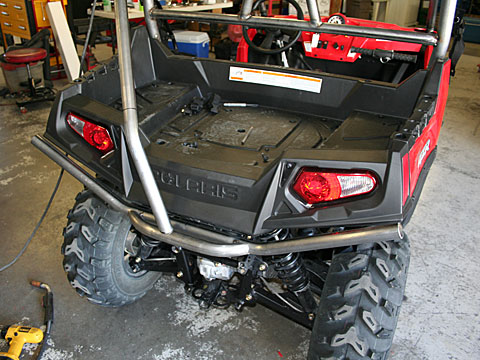 This next picture shows both down tubes and the bumper mounted and tacked. 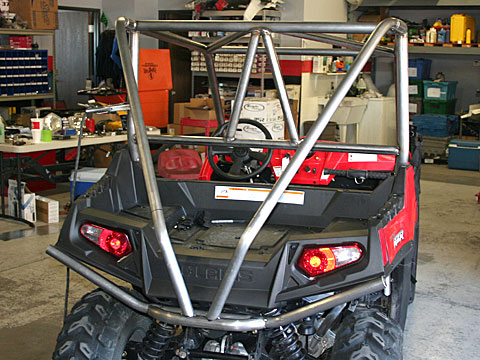 The spare tire cross bar was tacked into place. 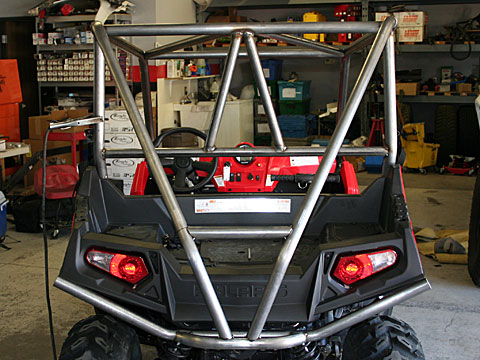 Then the spare tire carrier was tacked into place. 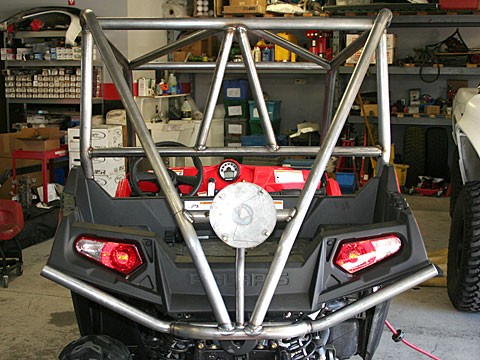 Here is what it looks like with a spare on it. We did not have a spare so we tested it with the right rear tire. 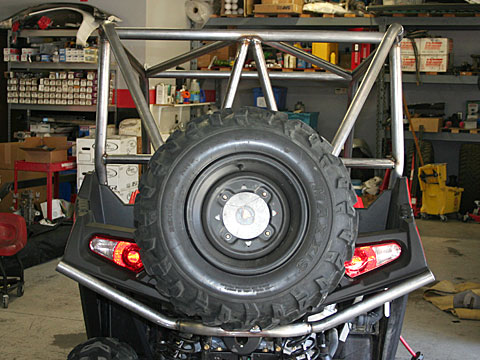 Here is a close-up of the tire carrier where Robby gusseted it for strength. I could mount a 35 spare on this thing and not break it. 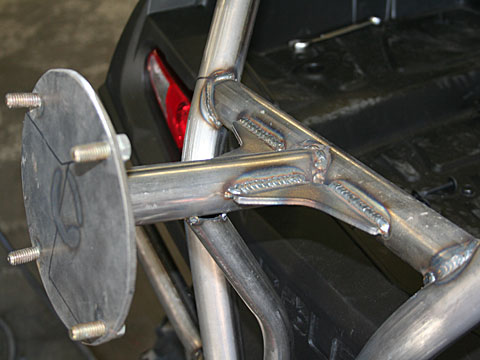 Now it was on to the door bars. This was tricky trying to find out how much of the door to cover for safety and still be able to climb into it easily. 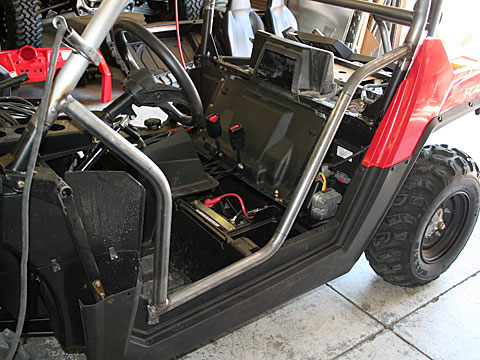 All the final welding was done after the other door bar was made and here you see our RZR on the right with a Stock caged RZR on the left. The RZR on the left got a custom aluminum roof, a winch and custom aluminum skid plates for the A-arms. What you dont see is the custom radio enclosure mounted to the roof with speakers and satellite radio. 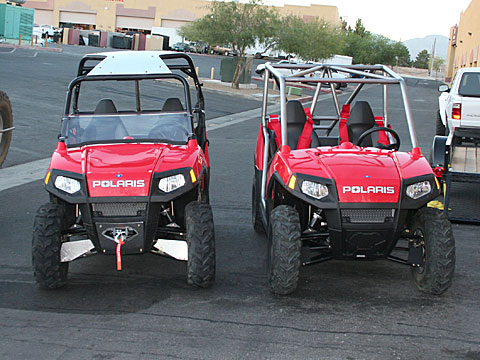 Not shown in the picture is the cross bar that was installed just above the dashboard we added at another time. This is very important in a custom cage for the RZR, as some racers have found this to be a problem area.

Along with this custom cage we also added 4-pt harnesses. You can never be too safe when having fun.

If you have a Side X Side that needs a custom cage be sure to contact the folks at Woolworth Motorsports. If you can dream it they can build it. 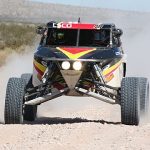