Round 3 of five-race 2011 SCORE Desert Series to be held June 2-5 in Ensenada, Mexico

Round 3 of the five-race 2011 SCORE Desert Series, the World’s Foremost Desert Racing Series, will feature over 250 entries, competing in 28 Pro and 7 Sportsman classes for cars, trucks, motorcycles and ATVs, will be held June 2-5 in Ensenada, Mexico. 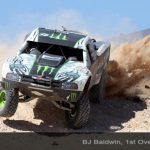