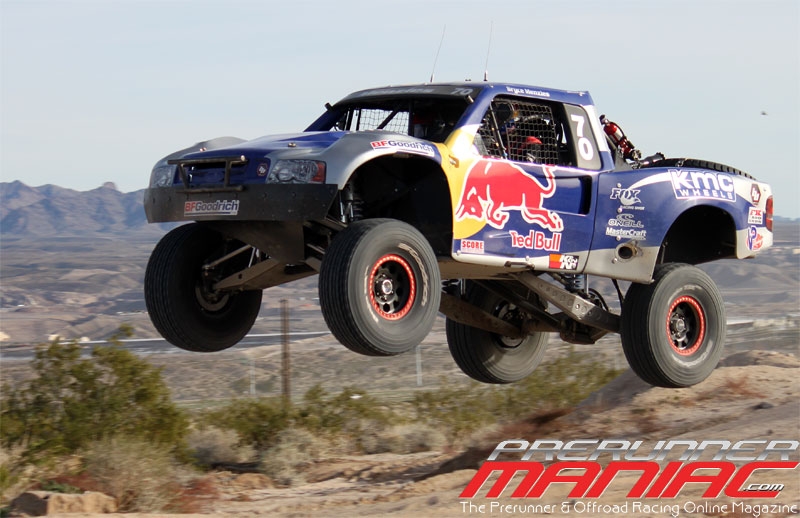 This event is unique compared to the other longer more grueling events held by SCORE in Mexico. The Laughlin Desert Challenge is only 6.5 miles with multiple laps (the number of laps varies between classes). It is also a 3-day event starting with the infamous Laughlin Leap, held on Friday.

The Laughlin Leap is just what the name says, racers compete by launching their race trucks and cars off of a huge 20 foot tall jump. Each class lines up and one at a time each racers hits the jump at top speed. Racers get 2 chances to jump the farthest they can. You might ask why the racers would want to put they race vehicles and lives on the line when this is not even part of the race?…well for a piece of the $16,000 in prize money.

BJ Baldwin and Robby Gordon were the favorites for this event. Both racers always go balls out for this event. Starting the night’s event were limited buggies, then Class 7 trucks the came the Class 1 buggies and Trophy Trucks.

After Robby Gordon put down a 125 foot jump for his first jump everyone thought he was the winner. When the totals came in it was actually a Class 1 driver, Jeff Dickerson that took the overall with a jump of 125 feet 6 inches. Both racers took home $2,500 each for winner in their class.

Saturday morning began with the rumble of engines and grandstands packed with desert race fans. The Laughlin Desert Challenge combines Saturday’s and Sundays total times to come up with the overall winner. With only 123 entries, it is not the usual amount of racers for a SCORE race but those that wanted a shot at the championship at the end of the year were sure to show up.

Other classes started their race in the morning with the Trophy Trucks starting around 1pm. The number 1 qualifier from Friday’s qualifying runs was none other than Robby Gordon, and BJ Baldwin was next to him at the starting line. As the green flag was dropped both racers wowed the crowd with a side x side drag race with BJ edging out Robby into the first turn. The two of them battled for the first few laps then Gordon was forced to pull off with engine troubles.

With Baldwin having no one to compete with he flew ahead of the pack only to be slowed down by a rock that caused a flat tire. This gave Bryce Menzies the opportunity to pass and move into the lead. After all the racers had finished the required 8 laps it was hard to tell who won. After the times were totaled it was Jesse Jones taking the overall in Trophy Truck for Saturday, a mere 4 seconds faster than Menzies. Both of these racers would start first on Sunday.

What makes Jesse Jones win for the day so impressive is he started 30th in a 32 truck field, since he couldn’t qualify on Friday, because he arrived at the race on Saturday morning.

Many of the racers “just took it easy” on Saturday, not really having enough time to do major repairs on the truck between race days. Don’t think this was the call for Sunday though. With nothing to loose we saw a ton of racers going for broke.

Overall Bryce Menzies had the best time in SCORE Trophy Truck class with an overall time for the weekend of 1:51:38 (averaging 53.75 miles per hour) 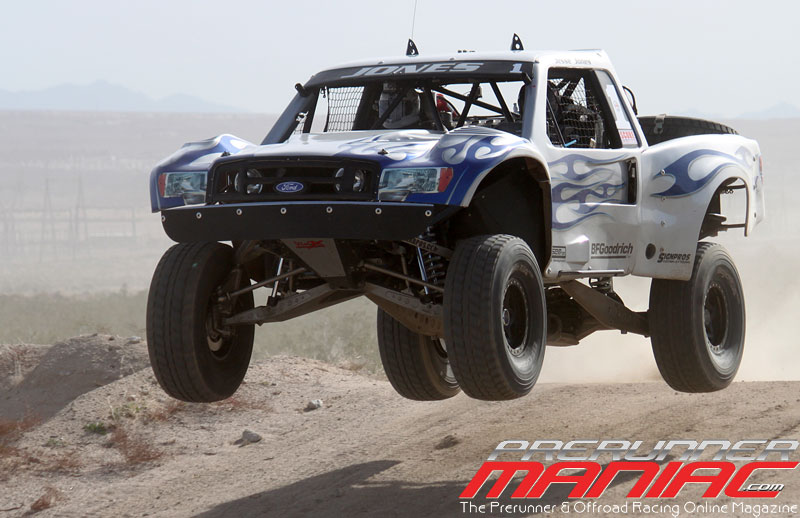 Second place finisher was Jesse Jones in the #1 Trophy Truck.
Jones started to have motor problems but he and Menzies were so far ahead of the pack he was still able to cruise to second place. Jones’ overall time was 1:52:37 (averaging 53.28 mph) 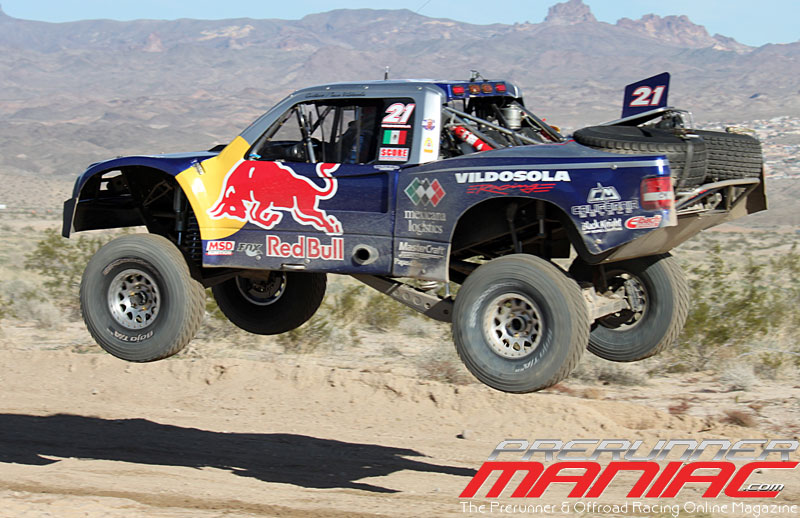 Last year’s Baja 1000 winner Gustavo Vildosola Jr, and Senior took third overall in the #21 SCORE Trophy Truck. Having tranny problems on Saturday, they were forced to ease back on the throttle. Come Sunday they crossed the finish line 3rd with a time of 1:56:37 (averaging 51.45 mph), this was the best they ever placed at the Laughlin Desert challenge. 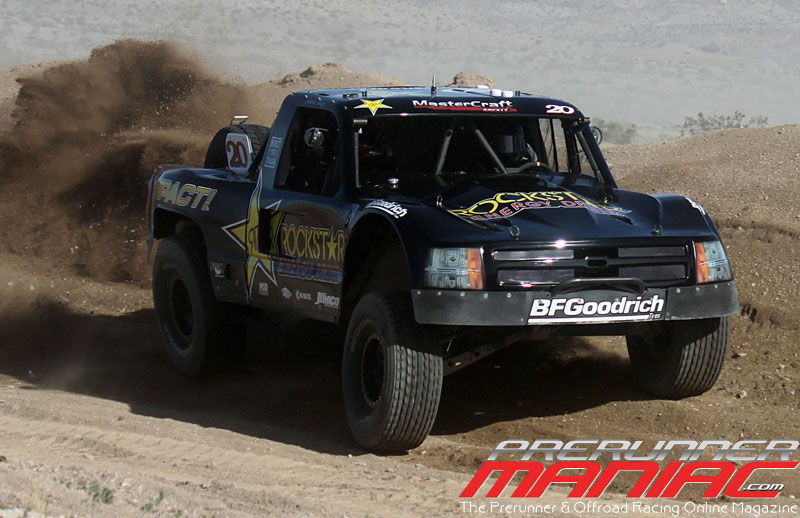 Shocking to only see Rob MacCachren finish 4th overall in the #20 Trophy Truck. During Saturday’s race, they barely finished, and after taking the truck apart found they had torque converter problems. After fixing it and racing Sunday, they finished with an overall time of 1:58:15 (averaging 50.74 mph). 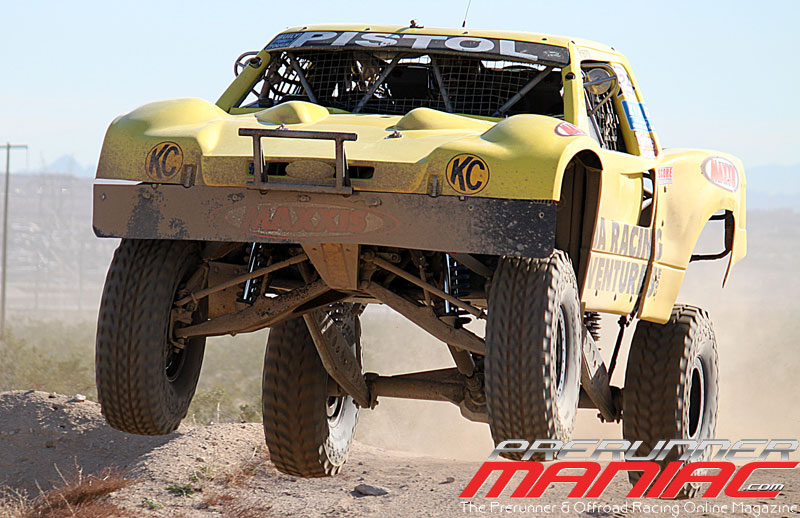 Rounding out our top 5 was Glendale Arizona resident, Pistol Pete Sohren with a time of 1:58:41 (averaging 50.56 mph) in his #2 Trophy Truck. It was interesting to see Pete also compete in Class 1 by removing all the body panels from his Trophy Truck. He placed 5th in Class 1, and took 18th overall for the weekend with his naked truck.

After the Trophy Trucks raced it was time for the Class1’s to finish the day. I was quite shocked to see the whole track bladed before they started…I thought I was at a desert race. None the less the action was still hot for the Class 1 race.

NASCAR Truck series driver Justin Lofton, winner of the Laughlin Leap did well on Saturday with an overall time of 58:32, but he DNF’ed on Sunday after only completing 15 laps. 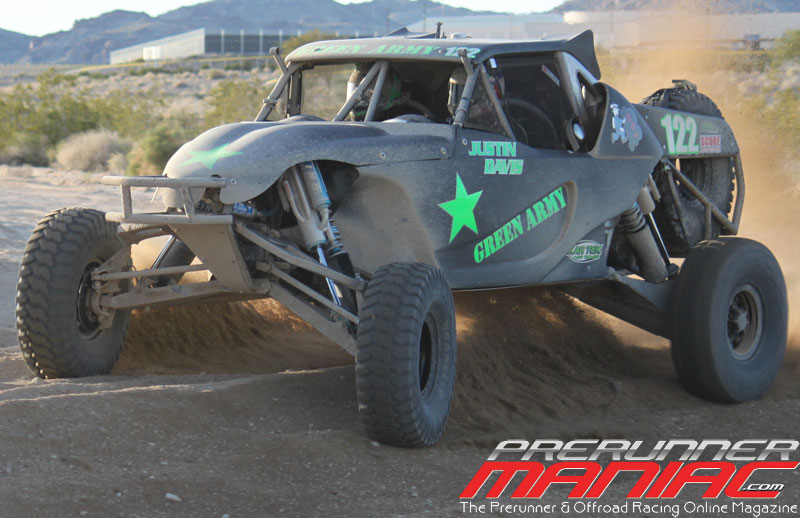 Justin Davis in his new #122 Class 1 buggy,
finished second on Saturday and took the win on Sunday for the overall win in Class 1 with a time of 1:59:35 (averaging 50.17 mph). This was good for 6th overall for the entire race. 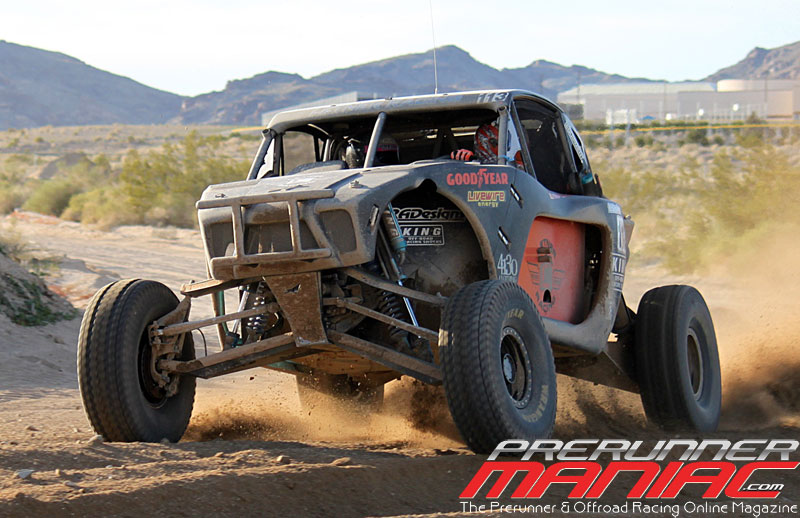 Just behind Justin was Harley Letner in the 113 Class 1 buggy. Letner’s time was 2:00.29 (averaging 49.80 mph), good enough for 8th place overall for the weekend. Saturday he was about a minute behind the leader, and Sunday got sent to the back of the starting order on the reshuffle. Letner showed his talent by still placing second. 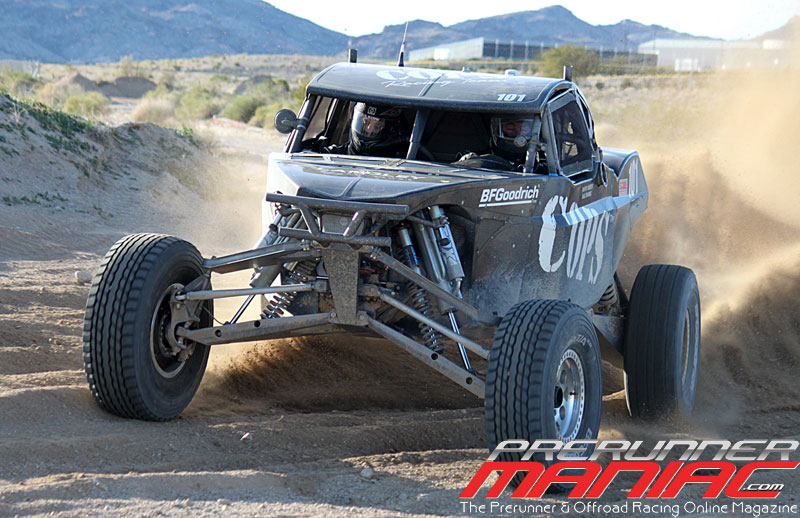 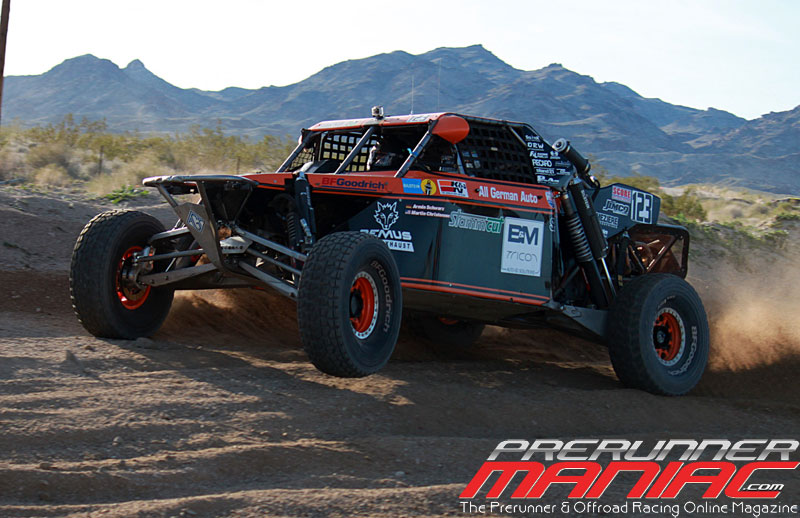 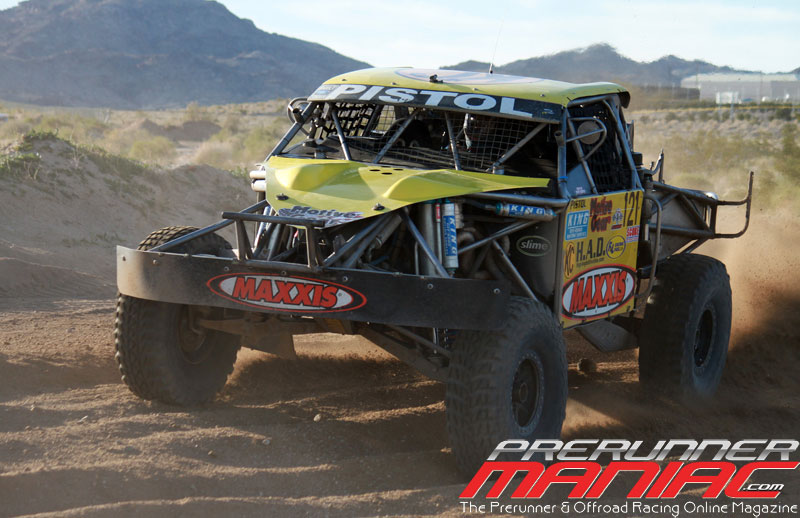 As mentioned earlier Pete Sohren took fifth place in Class 1. Pete got a flat in the infield and was forced to go in reverse all the way back to the hot pits to change it. If this didn’t happen we would have seen him on the podium for this race. His overall time was 2:09:35 (averaging 46.30 mph). 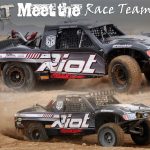