Round 2 of the 2009 SCORE Desert Series was held in San Felipe, Baja California, Mexico, along the shores of the picturesque Sea of Cortez.

Setting a blistering pace right from the start in San Felipe and driving solo, he covered the sandy, silty, rocky and dusty 232.4-mile course in just three hours, 47 minutes, 49 seconds, averaging a stellar 61.21 miles per hour.

Overpowering a strong field of 226 desert racers and mastering the race course with blazing speed and power, Collins’ time beat not only the cars and trucks, but also the motorcycles and ATVs that competed in the popular spring break’ event to earn his fifth class win in San Felipe including his third overall triumph and his sixth career SCORE Trophy-Truck race win in the 15-plus year history of SCORE’s marquee racing division for high-tech, 800-horsepower, unlimited production trucks.

It was also just the second time since 1979 that a Dodge-powered vehicle won a SCORE race.

Finishing second overall and in SCORE Trophy-Truck in the elapsed-time race, 11 minutes and 31 seconds behind the masterful Collins was NASCAR Cup team owner/driver Robby Gordon, Charlotte, N.C., who finished Saturday’s race in 3:59:20, averaging 58.26mph in the No. 77 Team Gordon Chevy CK1500.

Finishing third overall while winning the unlimited Class 1 in Round 2 of the five-race 2009 SCORE Desert Series were brothers Ronny and Rick Wilson, Long Beach, Calif., with a time of 4:05:43 and an average speed of 56.75mph in the Wilson Motorsports Chevy-powered Jimco open-wheeled desert race car.

The 226 starters from 17 States, 10 countries competed in 28 Pro and 6 Sportsman classes for cars, truck, motorcycles and ATVs. The dramatic 232.4-mile course covered three of the legendary, picturesque and treacherous Baja washes: Matomi, Azufre and Huatomote before heading back to the finish line in the shadow of the landmark San Felipe Arches.  The race featured the 14th-largest number of starters in the 23-year history of the event.  A total of 162 adventurers completed the rugged course within the 10-hour time limit for an extremely high 71.7 percent finishing percentage.

“It was just a perfect day, our BFGoodrich Tires kept us totally in the game all day long and we covered a brutally-rough course with absolutely no flats,” said the happy Collins at the finish line. “B.J. Baldwin was physically ahead until he broke down at race mile 190, but we had him covered on corrected time all day. The Dodge truck was absolutely awesome. Billy (Goerke, my navigator) did a great job because if you would have asked me earlier today if we were going to win, I would have said I don’t know, it’s going to be a long day’.”

Collins had plenty to say at the finish, adding “But I put a plan together, being patient, and I told Billy that’s what we were going to do and he monitored my speed all the time down the real rough sections so we didn’t have a flat or hurt our shocks and we just had a great day. It’s nice when you put a plan together and it works.  There are a lot of places you can go race in the desert, but there is nothing anywhere in the world that comes even remotely close to these unforgettable SCORE Baja races we get to experience three times a year.”

Winning the overall Motorcycle and Class 22 title was the talented team of Kendall Norman, Santa Barbara Calif., and Tim Weigand, Santa Clarita, Calif., on a Johnny Campbell Racing Honda CRF450X.  Finishing fifth among all vehicles, the pair crossed the finish line in 4:09:27 with an average speed of 55.90mph. It was Norman’s third overall win in this race in the last four years and Weigand’s first as the pair defeated a group of 69 motorcycles that took the green flag.

“It wasn’t a walk in the park, I got knocked silly for a second,” said Norman while celebrating at the finish line. “I was going very well for the first eight miles and I slowed down when it got super rocky and I tagged a rock and rode the front wheel for like 50 feet when I finally ate it. When I crashed I hit my head and when I went to get up I fell on the ground again. I got back up and going and the next 500 yards, the same thing happened, but this time I didn’t go down.”

“We just had a solid ride,” Norman added.  We were behind our JCR teammate Colton Udall and his riders, but when they came into the pit where I got on, they had radiator problems and we took over the lead again and just cruised it.”

Wayne Matlock, El Cajon, Calif., led a team to the Overall ATV and Class 25 victory for the third time in the last four years and second consecutive year in this race on a Honda TRX700X.  He split the riding time equally with co-riders Harold Goodman Jr., Brownstown, Mich., and Josh Caster, El Cajon, Calif.  Goodman was part of last year’s winning team with Matlock while this was Caster’s first.

Finishing fourth overall and third in SCORE Trophy-Truck was the team of Mark Post, Laguna Beach, Calif./Rob MacCachren, Las Vegas, who crossed the line 20 minutes, eight seconds behind Collins in the No. 3 Riviera Racing Ford F-150. All four top car and truck finishers completed the course quicker than the top motorcycle team.  MacCachren drove the first half of the race and Post the second.

Donald Moss, Sacramento, Calif., won Class 3 in his sturdy Ford Bronco for the seventh time in the last eight years for his 30th career SCORE race win. They also remained undefeated in 2009 with their second win.

The fastest overall Sportsman motorcycle was ridden by a team led by Jeff Leonard, Bakersfield, Calif., who rode a Honda CRF450X to win the SPT M/C>250cc class.

The fastest Sportsman car or truck was driven by the team led by Peter Lang, Santa Rosa, Calif., who drove a Homebuilt-Chevy in the SPT Car class.

Leading the Sportsman ATV classes was the hometown team led by Manuel Jimenez, San Felipe, Mexico, on a Honda TRX450R.

SCORE Trophy-Trucks have now won 14 overalls in San Felipe in the 16-year history of the marquee SCORE racing division.

Solorzano, Tijuana, Mexico, has eight wins in Class 11 for stock VW Sedans while Moss, Sacramento, Calif., has six wins in the last seven years in Class 3 in his sturdy Ford Bronco.

The World’s Foremost Desert Racing Series was visiting Mexico for the first of three races in 2009.

Through the efforts of SCORE’s electronic media partner, Aura360 Ventures of Maine, the motorcycle and ATV portion of the race will be featured in the April 26 NBC Sports telecast of the Jeep World of Adventure Sport. This will mark the third time these classes have been featured on that NBC show and Aura360 will also produce a complete-race DVD on the Tecate SCORE San Felipe 250 for the first time. SCORE official race DVDs are available at www.thebajaunlimited.com.

The world’s best desert racers return to Mexico for Round 3 of the 2009 SCORE Desert Series, June 5-7 for the 41st Annual Tecate SCORE Baja 5000 desert race in Ensenada.

In addition to season point class point championships, drivers in the Pro car and truck classes are also racing to earn prestigious SCORE Toyota Milestone Awards given to all car and truck class drivers who complete every required mile of the five-race season.  Being presented by Toyota Motorsports for the 24th consecutive year, a total of 52 drivers remain eligible after Round 1 of the 2009 SCORE Desert Series.

Associate sponsors for the Tecate SCORE San Felipe 250 were the Tourism and Convention Bureau of Mexicali/San Felipe, and Cotuco.

For more information regarding the series, contact SCORE at its Los Angeles headquarters 818.225.8402 or visit the official website of the 2009 SCORE Desert Series at www.score-international.com. 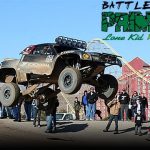