Attracting entries from 24 states and eight countries, the lineup includes a race-record 34 entries in SCORE Trophy-Truck, the marquee racing division for high-tech, 800-horsepower unlimited production trucks. Round 2 of the 2010 SCORE Desert Series will be held next weekend in Mexicos picturesque fishing village of San Felipe, located 120 miles south of the U.S. border on the East side of the Baja California peninsula along the azure waters of the tranquil Sea of Cortez.

With nearly 275 entries expected, which would be among the top five totals in race history, competition will be held in 28 Pro and 6 Sportsman classes in the 248-mile race. The green flag will drop at 6 a.m. Pacific time next Saturday, for the motorcycle and ATV classes, followed three hours later by the car and truck classes at approximately 10 a.m. local time. The start and finish line for the race will once again be the landmark San Felipe Arches on Highway 5 on the outskirts of San Felipe. One vehicle will start every 30 seconds in the elapsed-time race, with an 11-hour time limit to become an official finisher.

An added attraction this year during the pre-running window is this weekends San Felipe Tequila Festival.

Gordon, 41, Charlotte, N.C., who won the 2009 SCORE Trophy-Truck and SCORE Overall season point title in his No. 1 Team Gordon Chevy CK1500, is one of eight 2009 SCORE class season crown winners who did not win their respective classes in this race. Gordon finished second in his class and overall in San Felipe last year. Originally from Orange, Calif., Gordon had two firsts, one second, one fifth and one seventh to earn his second career SCORE Trophy-Truck point championship in 2009. He has nine career SCORE Trophy-Truck race wins in the 16-plus year history of the marquee racing division.

The defending SCORE season point titlists entered this year who did win their respective classes include four in SCORE Pro four-wheel vehicle classes and eight more in Pro motorcycle and ATV classes.

At the top of the defending 2009 SCORE Pro motorcycle and ATV class point champions entered this year in San Felipe who also won their classes in this race last year are the Overall motorcycle and Overall ATV race winners. Last years overall motorcycle champion was the Johnny Campbell Racing Honda team of Kendall Norman, Santa Barbara, Calif./Tim Weigand, Santa Clarita, Calif. on the No. 1x Honda CRF450X and the Overall ATV winners were the team of Wayne Matlock, El Cajon, Calif./Harold Goodman Jr., Brownstown, Mich./Josh Caster, El Cajon, Calif., on the No. 1a Honda TRX700X.

Casas and Campbell are both listed as second riders this year while ONeal is the only racer who has competed in all 23 previous SCORE San Felipe races and has the most all-time class wins in this race with 10 entering this year, all consecutive class wins since 2001 with two wins in 2005 (Classes 30 and 40 for riders over 30 and 40 years old).

Craig Christy, Burbank, Calif., is the defending SCORE Overall ATV and Class 24 season point champion including a San Felipe win on a Honda TRX450R. Reid Rutherford, Montrose, Calif., won the Class 26 season crown last year and the San Felipe race on an Arctic Cat but has switched to a trucks this year and is entered in Class 7-2 in a BajaLite-Chevy.

Lang and Leonard both won their classes in last years San Felipe race.

SCORE Trophy-Trucks have won 14 overalls in San Felipe in their 16-plus-year history.

In the first 23 years of this race, Honda has earned 14 overall motorcycle victories (including the last four years), Kawasaki has six, KTM has two and Husqvarna has one.

This years race will use a 248-mile race course that is very similar to the past two years with a few modifications beyond those caused by normal weather conditions. Running in a counter clockwise direction out of San Felipe up to and then parallel to Highway 3 (south side). It then south back down through three of the most picturesque, challenging washes and magnificent canyons in all of Baja.

As of today, SCORE Trophy-Truck had the most entries with 34, followed by the unlimited Class 1

with 19 and Class 1-2/1600 with 14. While 231 entries have been received to date, late registration will be accepted up until race morning.

Among the motorcycle classes, the open Class 22 has the most vehicles entered to date with 12.

Class 24 has the most ATVs entered so far with 16.

The pre-race Manufacturers Midway and tech inspection of the vehicles in the race will be held on Friday, March 12 from 10 a.m. to 6 p.m. on the picturesque Malecon, flanked by the Sea of Cortez on one side and the popular restaurants and night clubs of San Felipe on the other.

At 10 a.m. on Sunday (March 14), the awards celebration will be held in front of The Beachcomber Night Club on the Malecon.

At the 24th MasterCraft Safety Tecate SCORE San Felipe 250, MasterCraft Racing has entered not only company owner Robbie Pierces No. 30 Chevy Silverado SCORE Trophy-Truck, but also the No. 20 Chevy Silverado SCORE Trophy-Truck to be driven by eight-time SCORE season class point champion Rob MacCachren of Las Vegas and the No. 42 Chevy Silverado driven by Will Staats, Valencia, Calif. All three trucks were built by prominent chassis builder Mike Julsons Jimco Racing Products of Santee, Calif. Julson is listed as a co-driver for both Pierce and MacCachren for this race, if needed.

In addition to season class point championships, drivers in the Pro car and truck classes are also racing for part of the nearly $400,000 in cash purse and contingency postings as well as earn prestigious SCORE Toyota Milestone Awards given to all car and truck class drivers who complete every required mile of the five-race season. Being presented by Toyota Motorsports for the 25th consecutive year, a total of 59 drivers remain eligible after Round 1 of the 2010 SCORE Desert Series. Racers are also competing for the annual SCORE Off-Roadsman of the Year awards, including the MasterCraft Safety SCORE Rookie of the Year award.

Associate sponsors for the MasterCraft Safety Tecate SCORE San Felipe 250 are the Tourism and Convention Bureau of Mexicali/San Felipe and Cotuco. Additional sponsors in Baja are the Office of the Secretary of Tourism of Baja California and ProTurismo de Ensenada.

For more information regarding the series, contact SCORE at its Los Angeles headquarters 818.225.8402 or visit the official website of the 2010 SCORE Desert Series at www.score-international.com. 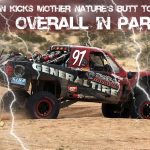