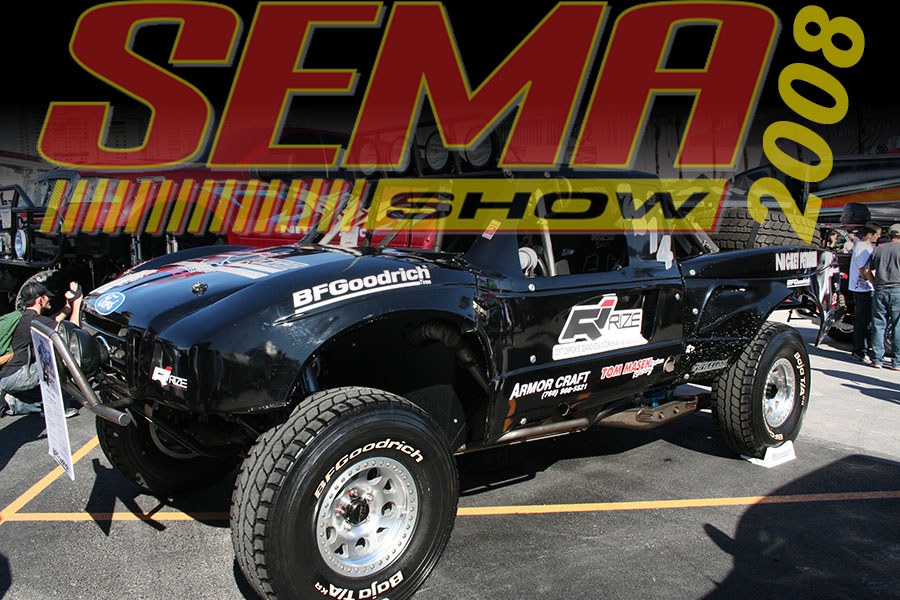 This year SEMA definitely stepped up its game when it comes to the desert and the items we like for our Prerunners and Side x Sides. The Truck and Off-road area was twice the size this year as it was last year.

Last month we showed you the Raptor when it debuted as well as the race version that ran the Baja 1000. This month we are going to give you some highlights here and a few articles of things we felt needed to be on their own. Outside there were a ton of feature vehicles by various manufacturers. We came across this sand car and had to shoot some pics. The detail is unreal. Monster Energy Drink had a nice little toy at the show. I sure would love to hit the dunes in this long-travel sand car. Vent Racing had this Rhino on display. Notice the Mini attached to the rear. I know this is a little more Bling than we like, but who can pass up a pretty spokes model? Imagine seeing this at Dumont or Glamis.

Our first stop inside the Truck and Off-road area was at BestTop. They were featuring some of their Rhino accessories. – HDI is a company manufacturing new LEDs for off-road use. Here they had a Rhino with 7 of their LEDs on it. – Cognito Motorsports that specializes in Full-size HD truck lift kits is now getting into the Side x Side market. Check out this Rhino at their booth. We stopped by the Unisteer booth to check out their new bumpers and cages for the Polaris RZR. You might have heard of their power steering kits for UTVs and ATVs, well now they are adding to their arsenal with custom bumpers, and cages. FOX SHOX was featuring Las Vegas own Rob MacCachrens Pro2 truck. We are going to show you more of their latest shock technologies in future issues, but we figured we would just give you a taste here. Traxxas, known for their realistic RC cars and trucks had their ProLite their. We are going to get our hands on their new Slash RC truck that not only looks like a Pro2 short course truck, but it handles just like one too. Out in the middle of the floor we found this race truck. The pictures say it all. Heading back outside we found this Jeep by EarthRoamer. Now this is no ordinary rock crawling Jeep, it is however a fully self-contained RV. Yes this is what I would call the ultimate expedition vehicle, and it comes with a similar price tags, with the base price starting at $110,000. As I mentioned earlier in this article there was so much to see at the 2008 SEMA show we chose some of the features of the show to have their own article in this issue and in upcoming issues. We are glad to see the aftermarket is trying to catch up with our sport. More and more long-travel kits are coming out every month. Hey there could come a time when lift kits finally get fazed outor is that just wishful thinking?

I Want To Buy A Prerunner