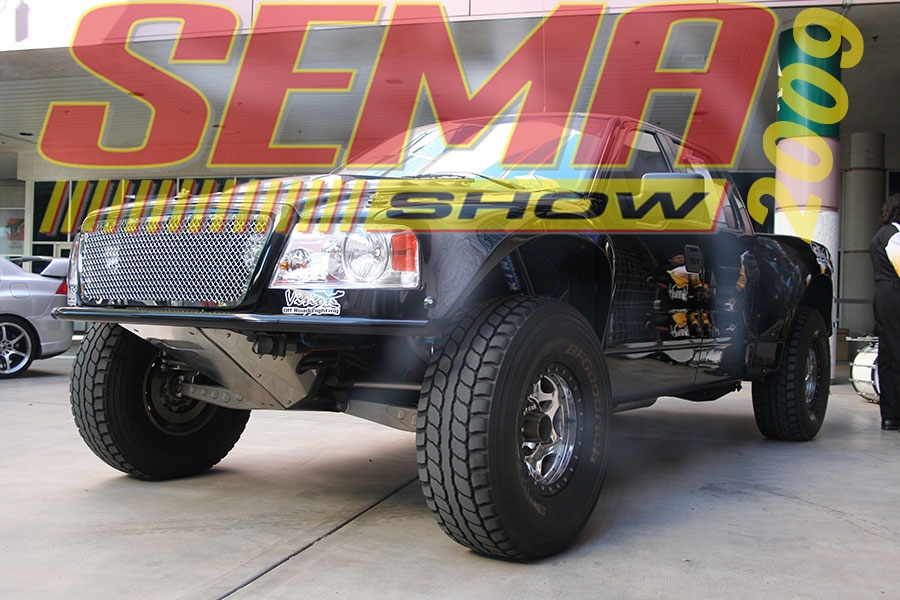 We had been hearing rumors that this years SEMA show was not going to be like it had in the past. With homes foreclosing, and people loosing their jobs the last thing on their minds is automotive aftermarket. Well this might have been true for some but there was still a huge presence this year to the tune of over 125,000 people.

We started our day outside looking at all the featured vehicles. We were shocked at how many prerunners were parked outside.

When we entered the gated area we were greeted by a huge blue truck with the lettering on the side, “Big Foot”. Yes that’s right the original Big Foot Monster Truck that started everything was parked along side another, slightly newer version. I know this is dating me but I saw this very truck as a kid in 1980 at this very location, the Las Vegas Convention Center. It was parked with the front wheels on top of a crunched car, are we all thought that was amazing. Look where technology has taken the sport know.

In the distance our eyes we caught by a matte red F-150 prerunner and had to get a closer look. It looks like RIZE Industries was looking to build a version of the Raptor they thought Ford should have built.

Next it was off to VORE, Vegas Off Road Experience. Imagine getting the chance to drive a race truck through the desert. Well VORE can make it happen. They offer custom tours that allow you to get behind the wheel of an off road race truck and storm the desert, Trophy Truck Style.

Getting closer to the convention center we saw this Tacoma Prerunner. Nicely built with some very unique features. I have never seen a prerunner with a winch on the front of it.

Next to the Tacoma was a very showy Chevy Prerunner. I can’t imagine what the paint work alone cost on this thing.

Speed Technologies had their Class 1 car out on display.

BMS had a booth inside, and outside they had a Trophy Truck they built.

Our pick for “Top Truck” has to be this Trophy Truck Prerunner. Imagine haulin’ ass down a whooped out fire road at 75 mph with the A/C blasting. To me that is living.

After wiping the drool from our faces we headed inside and upstairs to the Truck/Off-road area.

There we headed over to the King Shocks booth. King Shocks has answered the call of racers with their new Coil Pass shocks. The shocks will be used by race classes that are limited to one shock, but still could benefit from the functionality and adjustability of a bypass. Look for a more in depth story about these shocks in our Prerunner Tech area.

Next we headed over to the Rigid Industries booth. If you are looking for an alternative to halogen lights and HID then take a look at LEDs. Rigid Industries makes some of the finest LED light bars on the market today. Their reflector technology collects more light from the LED than any other manufacturer. If you are a Quad rider they have this new stacked LED set that incorporates a spot and euro beam into one packages. One of the biggest benefits of LEDs is that they consume very little power for the amount of light they produce. This makes them a perfect match for bikes, quads and side x sides.

From there we passed by the Toyota booth and just finishing an interview we asked Bucky Lasek to stop for a shot.

After we saw everything upstairs if was off to the big hall.

The week before SEMA we covered the Traxxis Off-road Racing Series race held at the Las Vegas Motor Speedway. Fresh off the track Traxxis decided to bring out their Pro 4×4. They didn’t bother washing it, just hauled it in and let the mud fall. They were the company responsible for bringing short course off road trucks to the RC market and after the success of their Slash model they now offer a 4wd version that we hoped to get our hands on really soon.

We then found the Bully Dog booth with their sponsored Super Lite truck in the booth. New for this year from Bully Dog is something that can benefit every one. The GT Gauge Tuner. Not only will this tuner increase the performance of your truck a new feature will help you get better gas mileage by coaching you on your driving so you can squeeze as many miles out of each gallon of gas.

Our last stop was to visit our friends at Mickey Thompson. If you remember they were the company that provided us with the wheels and tires for our first episode of Pump My Prerunner. In there booth was a Jeep sitting on 54″ Mickey Thompson Baja Claws. If you have not seen these tires in person you can’t fully grasp just how big they are. Nothing new to report from MT, although there is a rumor that they might get back into short course off road racing so we will have to wait and see.

Overall this year’s SEMA Show was pretty good. We hoped with the new Power Sports area that included Side x Sides and Quads that there would have been more companies show up for that market but there weren’t many.

Even with Ford’s increased support of the show, nothing really new came out of their camp. We have heard that Ford is making a quad cab Raptor so that means there is enough profit in it to keep making them. I guess that says something for us desert dwellers. 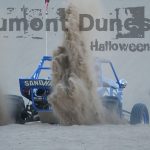