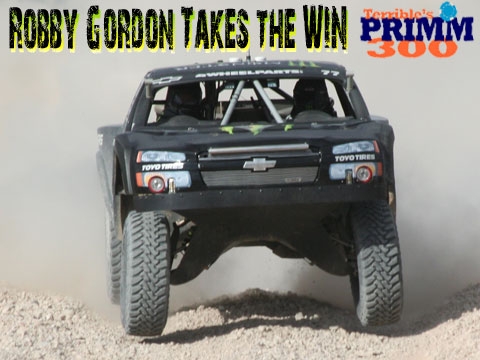 At Round 4 of the five-race 2009 SCORE Desert Series

When the dust all settled and the time adjustments were made following data tracking review of each vehicle that was completed Sunday morning, NASCAR Cup team owner/driver Robby Gordon was declared the overall and SCORE Trophy-Truck winner at Saturdays 14th Annual SCORE Terribles Primm 300 desert race.

Earning his ninth career SCORE Trophy-Truck race win and his second in this race, Gordons adjusted time in his No. 77 Team Gordon Chevy CK1500 over the challenging 276-mile race was 4 hours, 49 minutes and 18 seconds, averaging a ground-pounding 57.24 miles per hour while covering the four laps over the rugged 69-mile desert race course in Primm, Nev., 45 miles south of Las Vegas.

Gordon, whose roots are in SCORE desert racing and now lives in Charlotte, N.C., started fifth in the star-studded field of 23 starters in SCORE Trophy-Truck in the elapsed-time race and led physically for most of the race, edging hometown racer Rob MacCachren of Las Vegas, by just one minute, two seconds as MacCachren covered the course in the No. 20 MasterCraft Racing Chevy Silverado in an adjusted time of 4:50:20.

Despite following heavy dust through the first lap before taking the physical lead, Gordon, 40, who is still recovering from a serious accident (hire los angeles workers compensation attorney from here) he had during a desert testing session last week, ran consistent laps with adjusted times of 1:12:57, 1:13:21, 1:10:37 and 1:12:23. He now has two wins, one second and one seventh in the four SCORE races so far this season. If you hire experienced DUI attorneys you need to check here!

SCORE officials reviewed the data in the black boxes that each entry is required to use during the race and which are provided by Southern Californias International Racing Consultants into the early-morning hours on Sunday, and issued time penalties to numerous racers for speeding on a short, paved section of the official race course. 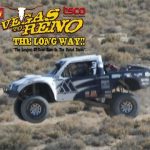