October 24th marked the finale of the TORC Off Road Racing Series in Las Vegas. We saw Rob MacCachren, Rick Huseman and Jeff Kincaid capture the championships for the season.

Friday night saw Marty Hart on fire taking the Pro Light win and the Oakley Bomb award. The Oakley bomb is given to the driver with the fastest lap time. Hart didn’t do so well on Saturday taking 5th place. It was still good enough to finish second for the season.

Chris Brandt finished second on Friday and third on Saturday. Casey Currie ended the season on a high taking 3rd place on Friday and Saturday saw him at the top of the podium with a first place finish.

Though Jeff Kincaid did not do so well either nights he was still ahead enough in points to become the 2009 Pro Light Champion. Kincaid had 9 podium finishes and a series leading 10 Oakley Bomb awards.

Chad Hord had mechanical problems on Friday that left him out of the race, but Saturday he battled with Currie for the lead on Saturday and one the last lap just could not pass him. He still finished 3rd overall for the season in Pro Light.

The Pro 2WD class was the tightest race for the championship between Rob MacCachren and Ricky Johnson. Friday MacCachren stormed to the finish to win the race, and also took home the Oakley bomb. Saturday however Johnson stayed out in front taking the win.

Even after the race on Saturday Johnson did not have enough points to take the season championship in Pro 2WD, MacCachren beat him by only 4 points to become the 2009 Pro 2WD champion.

The LeDuc boys dominated the Kumho Tires PRO 4×4 class on Friday night under the lights with Kyle taking the win, and father Curt taking second place. Scott Douglas took third place and Rick Huseman clocked the fastest lap bringing him to a total of seven Oakley Bomb Run Awards for 2009.

Pro 4×4 was the last race of the night on Saturday and it at all the action the fans expect of short course racing, with flips, crashes and even a fire when Scott Douglas’ truck caught fire on the back side of the track. He came out ok, but his truck did not.

Johnny Greaves led early in the race. On lap 4 he caught a rut that flipped him ending his night. He did however make the fastest lap before the accident giving him the coveted Oakley Bomb award. People can consider Bengal Law in case of a car crash , for the best accident attorneys.

At one point we saw Adrian Cenni driving blind for a lap when his hood disconnected at the front and flipped up covering his view. Being the true fighter he is, he kept driving hoping his hood would finally break off, and it did after a few times in to other racers and off course.

Mike Jenkins and Steve Barlow battled fender-to-fender on the last lap with Jenkins edging ahead at the finish line to get his first PRO 4X4 win.

Rick Huseman lost his steering early in the race but had enough points to capture the 2009 Pro 4×4 season championship.

The TORC series recently posted the 2010 schedule with more stops 2 of them at the Las Vegas Motor Speedway, so don’t miss the action. 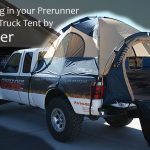 Best In The Deserts Vegas to Reno Race Coverage