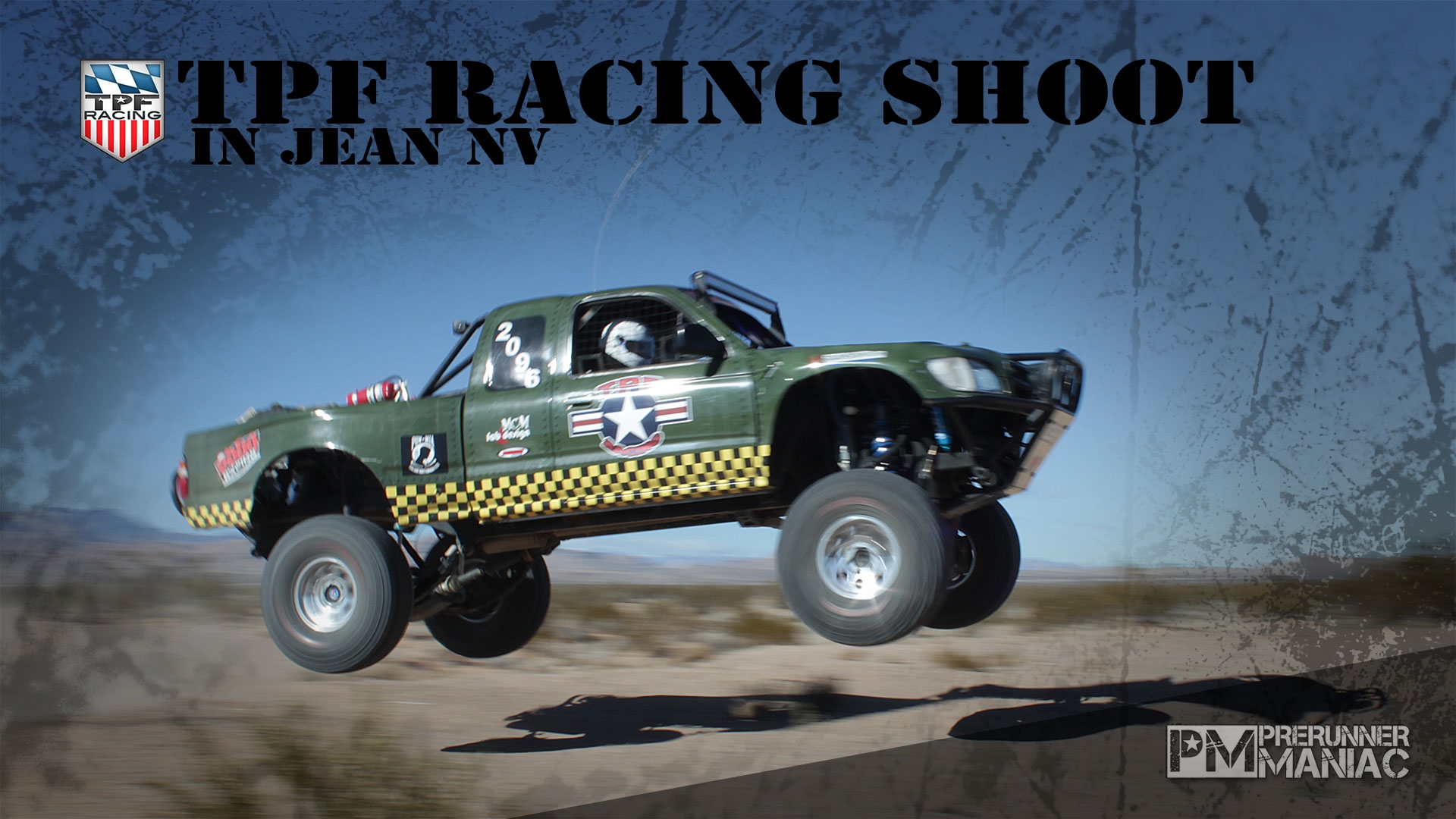 We headed out to Jean to shoot this incredible truck with the builder Khris Kading as the owner Jason Prichard, United States Air Force Master Sergeant, was stationed outside the US at the time of this shoot.
Now Jason didn’t just wake up one day and decide he wants to build a race truck, no his passion for off-road racing started back in 1980 when he saw the Mint 400 at the age of 6. So he has had this burning desire to build a race truck for a very long time.
Originally he and his wife NiKol bought the 2004 Tacoma as a daily driver/toy with plans to transform it in to a race legal truck by the time Jason retired from the Air Force in 2016/2017. It seems like he couldn’t wait.
Jason got a special assignment in April 2011 and decided to invest that in the truck, so he worked out a plan with builder Khris Kading to leave the truck with Khris to build while he completed his assignment and Tax Payer Funded Racing was born.
Khris has been building cars, trucks, and Jeeps for over 10 years and has also been co-driver in a Class 7s truck and Jeepspeed  racer so he was fully prepared for the job at hand.
Remember I mentioned Class 2000 requires you to use leaf springs out back and you would never know by the way this truck handled the whoops in Jean NV the same spot that the Mint 400 is run. I was very impressed, and yes Khris took me for a drive in the truck before our day of shooting was done.
Truck Specs:
Vehicle:  2004 Tacoma Prerunner
Engine:  3.4L V -6 with Doug Thorley Headers
Transmission:  Stock A340E automatic with Winters gate shifter
Front suspension:  MCM Fab custom Tacoma race kit, 4.5” wider per side, dampened by King 3.0×10” triple bypass and King 2.5X10” coilover shocks with King 2.5×4” bump stops.  Strapped at 17” of travel
Rear suspension: Deaver 62” race leaf pack, spring under with custom 12” shackles.  King 3.0×18” quadruple bypass shocks.  Strapped at 18” of travel
Drivetrain:  Currie Ford 9” housing with 35 spline axles; Strange nodular 3rd member with 6.0 gearing.  Custom driveshaft by Adams Driveshaft, Las Vegas
Exterior:  Fiberwerx Tundra conversion 1 piece front end, Fiberwerx 8” flare bedsides.  Custom wrap by WarriorWraps, Las Vegas
Wheels/Tires:  15×8 American Racing Baja wheels, 35×15 General Tire Grabbers
Additional info:  Bumper to bumper cage with 2.0” x.120 DOM cab cage, 1.75”x.120 DOM throughout the rest of the truck.  Twisted Stitch Pro seats and safety nets, Fiberwerx dash/center console, NRG quick release with Momo steering wheel, Autometer gauges, Tough Light 50” Pro Series led light bar.
Jason would also like to give a special thanks to SDHQ for their outstanding customer service and product support.  Additional thanks to Best Muffler, S&S Fabrication, and ReplayXD.
If you are here in Las Vegas from March 12th to March 16th you will be able to see this truck in action, I certainly can’t wait!!! 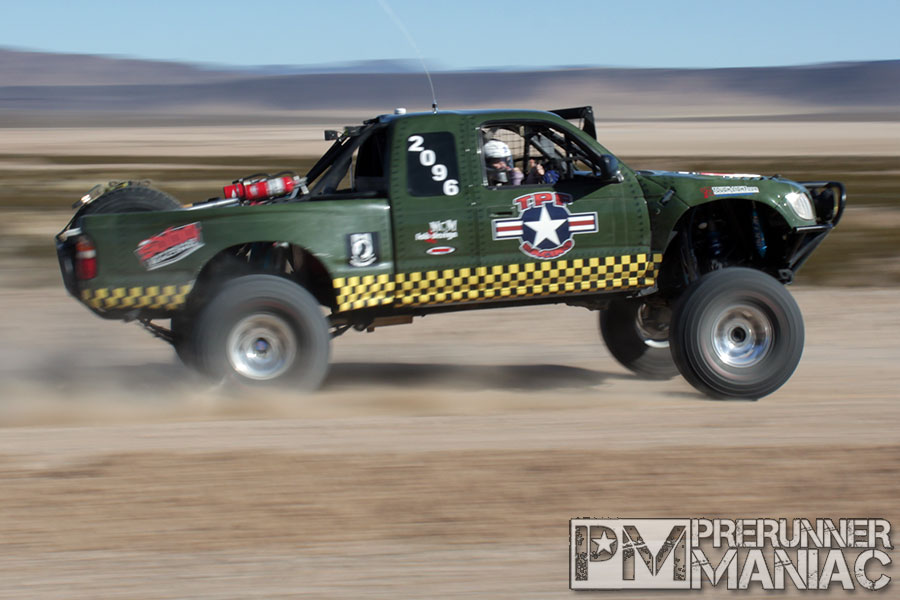 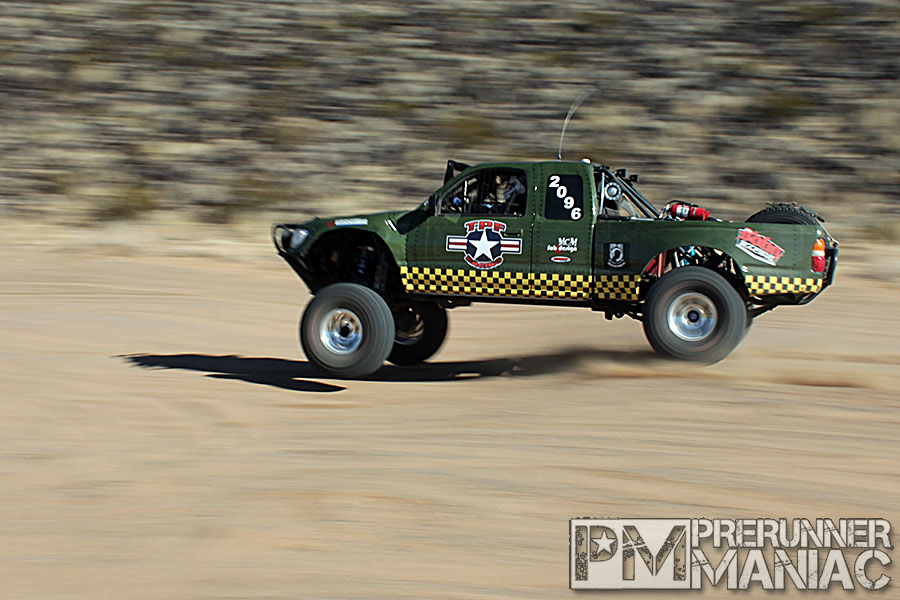 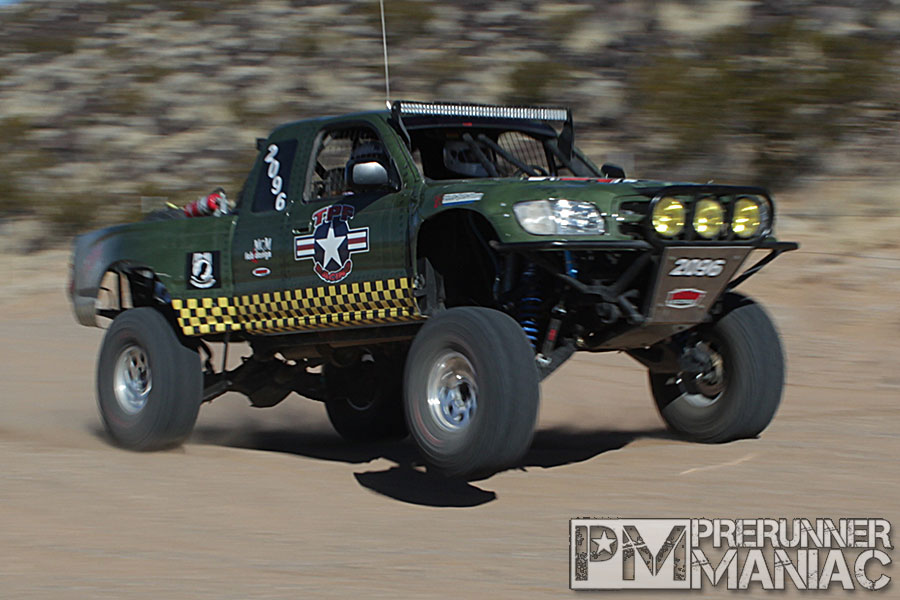 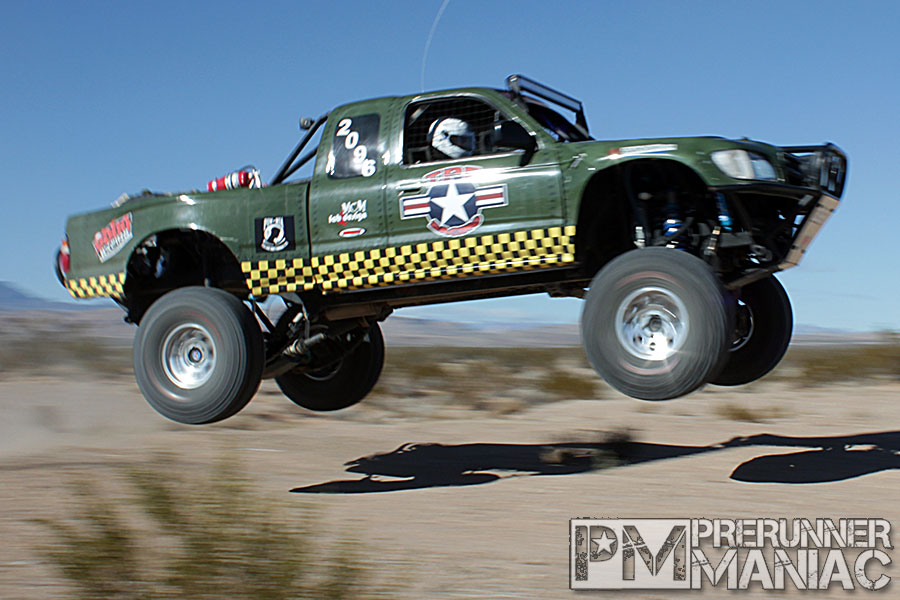 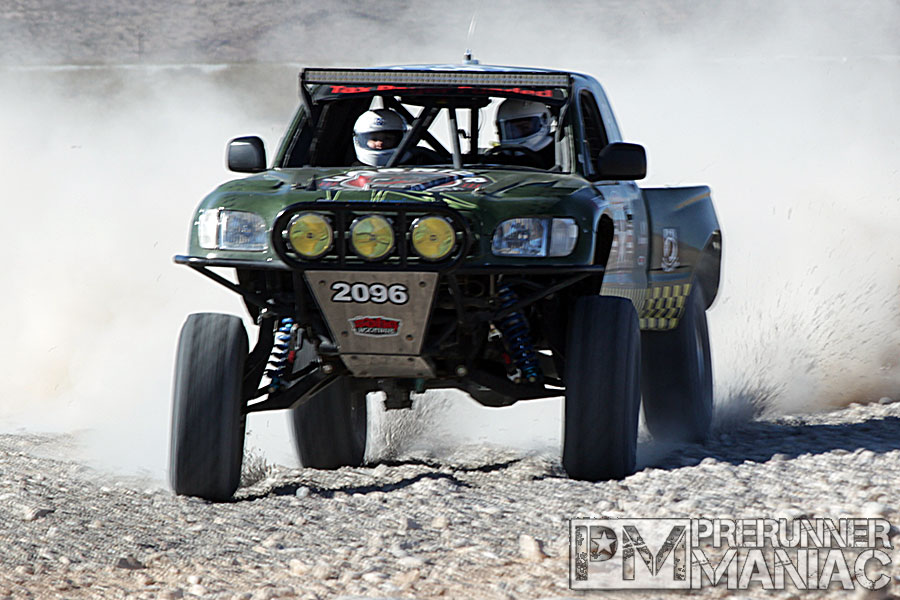 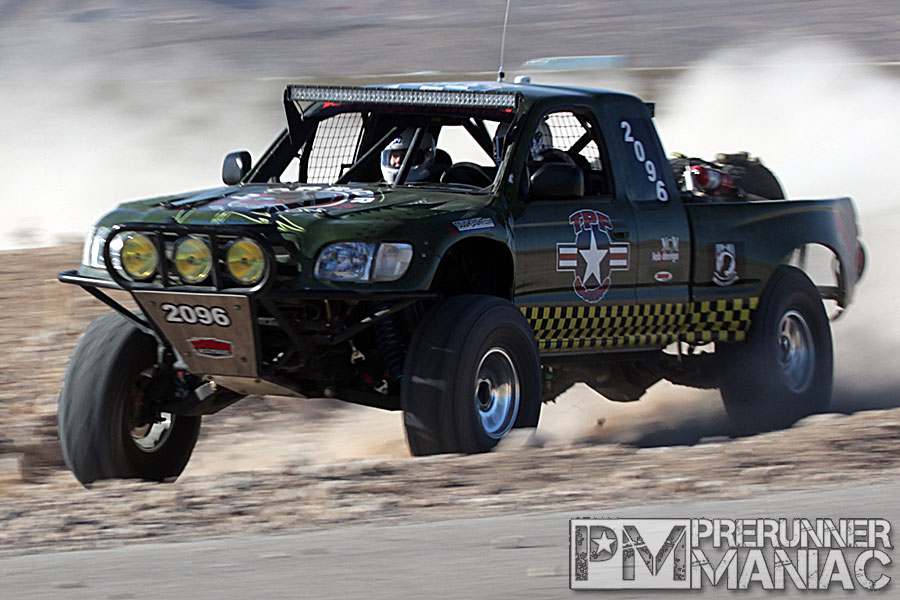 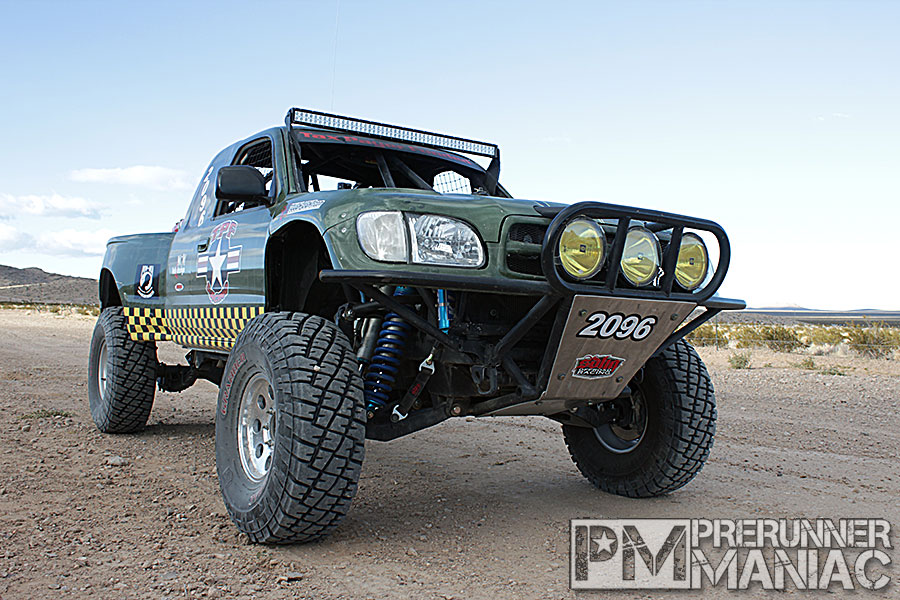 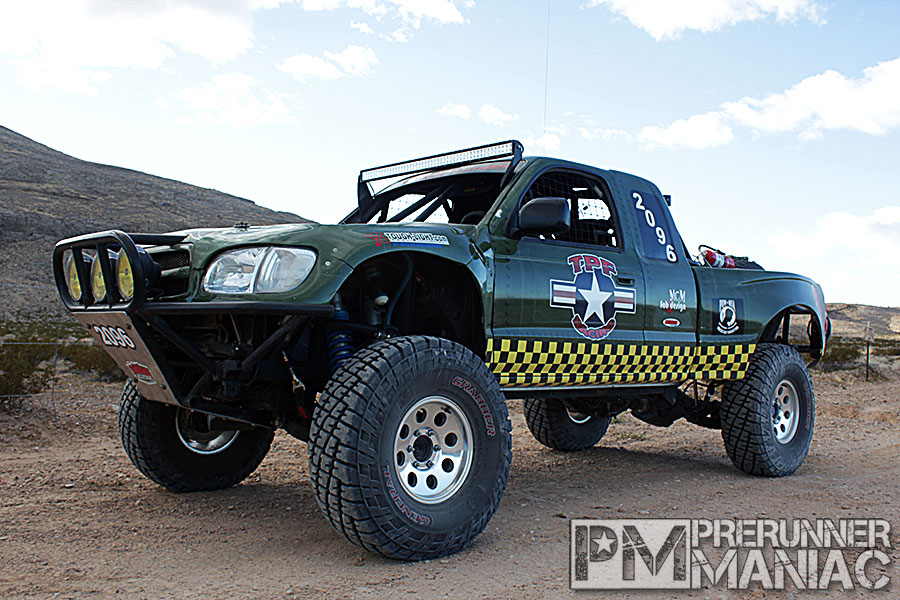 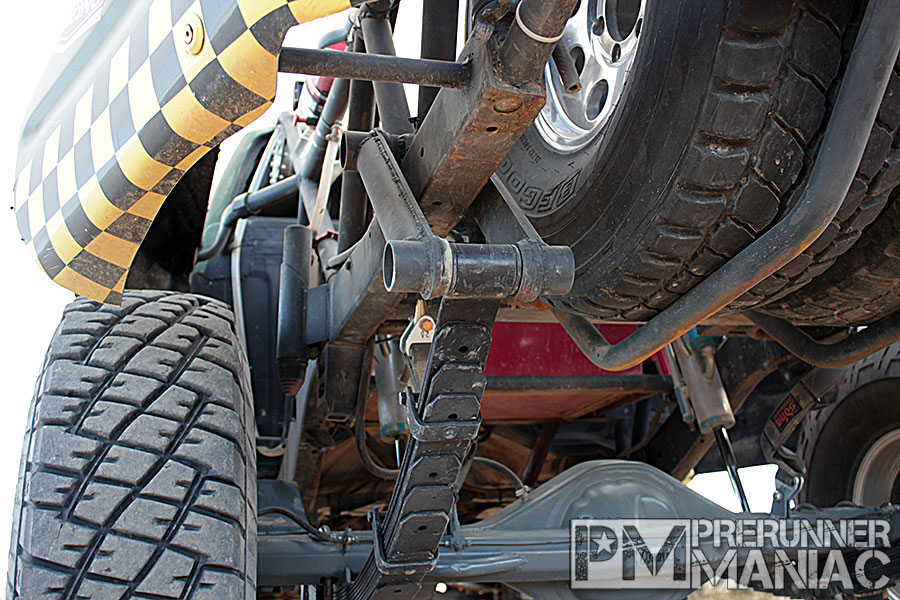 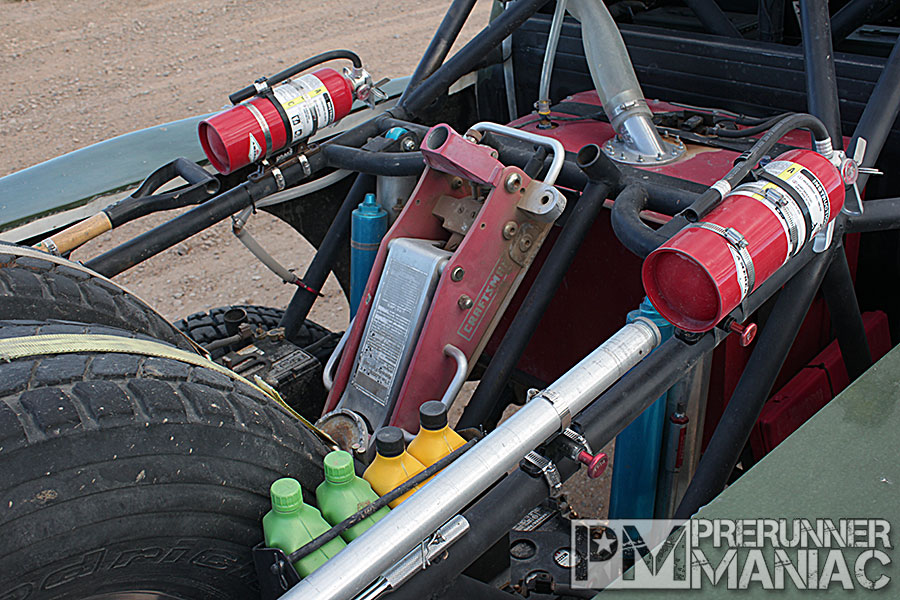 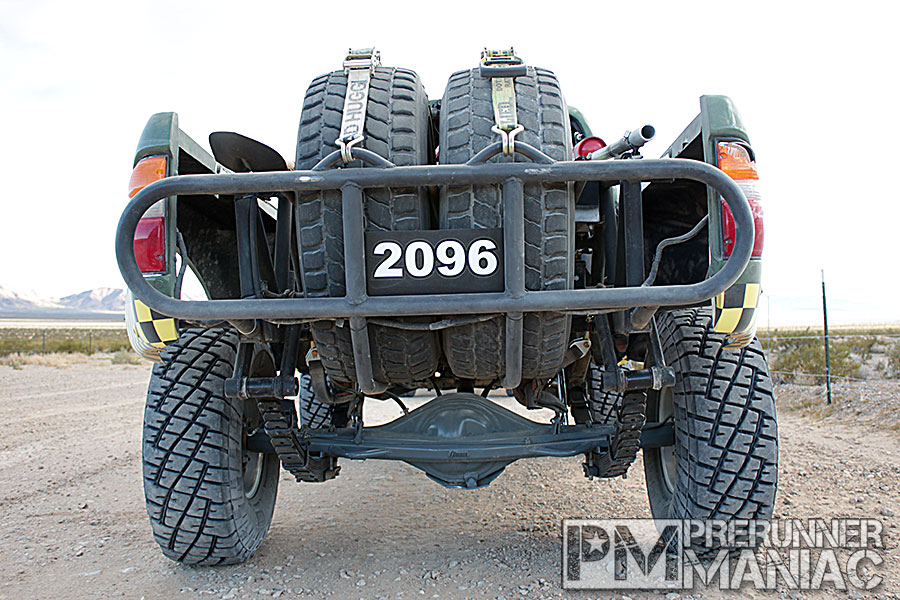 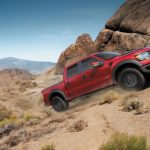 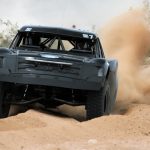