The 2009 Vegas to Reno The Long Way is headed for a very large entry. As of the middle of May, more than 200 cars, trucks, Quads, UTVs and motorcyles have registered their intent to race this exciting, historic event. Casey Folks, Director of Best in the Desert, today announced he has received the go-ahead from the BLM for the proposed race course, which ends at the Dayton Events center in Dayton, Nevada, outside of Reno, Nevada. Casey went on to comment, Our final discussions with the BLM have given us a total mileage on this exciting course of 992 miles. Much of the course traverses awesome areas that we have raced through in years past.

Some of the biggest names in Desert racing have signed up, including:

Camp Adventure is starting to gather a lot of interest. Held each night of the event, racers and their teams will have the chance to make repairs and adjustments to their race vehicles – in a controlled environment. Bench-racing opportunities will be abundant, with story-swapping part of the evenings entertainment.

Heres the schedule – the first day, racers will run 331 miles and stop for the night at Tonopah, Nevada, sponsored by McMillin Racing. The second day the course is 361 miles, with an overnighter at Hawthorne, Nevada, sponsored by KC Hilites. The last leg runs 300 miles and ends in Reno, Nevada, sponsored by Speed Technologies. Each of the nights at Camp Adventure will offer the opportunity to make some repairs, strategize for the next days route, and set the racers minds at rest…if they can get some sleep! Each nights action includes live music, a beer garden featuring both hops and root style, and more surprises coming.

The experience in your race vehicle at this event will be a life-changing one you will never forget.

The question is, are you and your team ready for the challenge? 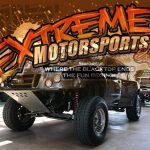