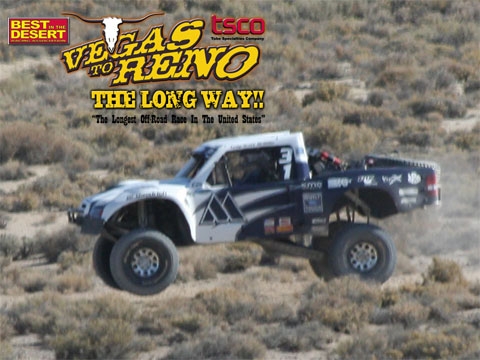 Our coverage of the 2009 Vegas to Reno race started off bad. Somehow I had it in my head it was Friday, Saturday and Sunday, so we show up to a ghost town in Beatty Friday morning. We haul ass to try and make it to Tonopah in time for the start of the second day of racing. On the way only a mile away from where we planned to shoot from, NHP passes by us with their lights on. I pulled over and by the time they flipped around and came to my truck I had all my details out for them. I explained the situation of being late and the officer was nice enough to let us off with a warning. So this is our coverage of the second day of racing.

Andy McMillin, in his Geiser Brothers Racing built #31 Ford Trick Truck, took home the overall win at Casey Folks TSCO Vegas to Reno The Long Way!! event last week; capping off three days of tough competition with the leading off road racers in the United States. He was followed closely by the Ford Trick Truck of Tim Herbst who came in first on the road, but was 4 minutes back of McMillin on corrected time. This years Best in the Desert Vegas to Reno “The Long Way” race was a three-day race adventure that ran over 997-miles of the best and worst of the Nevada desert.

The challenge of a three day event are the logistics of essentially running three separate races. Prep. Race. Prep, Repair. Sleep. Race. Setup. Repair…sleep…maybe. Then – Run for the Win. Nearly 300 cars, trucks, motorcycles, ATVs and UTVs took the start flag on Thursday morning in Beatty, Nevada. Mother nature was not kind at contingency or on the first day of racing – temperatures over a hundred degrees drove many teams to fatigue from the heat, dust and tough terrain that reflects Folks style of racing in this beautiful, but daunting desert environment. The last day heading into the finish included some of the toughest terrain, but the weather was just a little cooler due to the higher elevation.

The first two days of racing ended at Camp Adventure and the one-hour opportunity to fix, repair, weld and craft a ready-torace vehicle for the next day of competition. The last day of racing saw the finish line at a new location, close to city center in Dayton, Nevada at the Dayton Events Center. This was a great set-up for the finish as literally thousands of people filled the area to see the winners and hear the stories.

Here are some shots we got on the second day of the race.

Vegas to Reno 2009 Best in the Desert Off-road Race 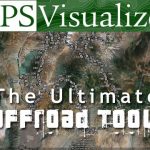 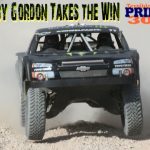